I’m In a Relationship With the Woman I Cheated With and I Want to Go Back to My Ex. 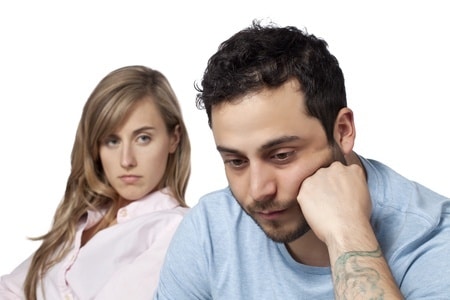 Evan, I’ve read a few of the posts and responses and can’t quite seem to find the answer I’m looking for, or similar situation, so figured I’d ask you straight up.

I dated a girl for 2 years and felt I was in love with her, yet, couldn’t quite pull the trigger – get the ring, get married and start a family. I felt the pressure, I pushed it off but it continued to hang over me like a dark shadow. It seemed that it became the only thing my girlfriend cared about. Whenever I would give her a gift, surprise her with dinner or a show, it seemed that she was disappointed that it wasn’t a ring and a proposal. We talked about it, again and again and again, but seemed to make no progress.

Then it happened, I met a girl through friends that I really seemed to click with. She, too, was in a relationship and neither of us wanted to cheat on our gf/bf because we cared so much about them and everything that we had built up with them. The need not to cheat didn’t last long – 30 days or so later, we found ourselves alone – the first wrong move – and then one of us leaned in for a kiss and it happened. We slept together, we had sex and it was amazing. It felt like a release on both our parts. We agreed that it wouldn’t happen again unless we both felt that it was time to end what we had.

We kept our promise, but both ended our relationships and 2 weeks later got together and a year later we’re still together. Lately however, in fact for the last few months, I’ve been thinking a lot about my ex. I did early on too, but lately even more. The songs, the restaurants, the friends, the activities, our places, etc., all the same experiences but with a new girl, doesn’t seem to remove the ex from my memory. I then began to think of how I’ve changed and opened myself up to change and if I had been this way perhaps the last relationship would have worked out. – I say to that, perhaps the last relationship didn’t provide me with the atmosphere to get to where I am emotionally today – so I see both sides of it. I find that the thoughts that I continue to have is making it increasingly difficult to move forward.

On top of it, I feel riddled with guilt that I cheated and that I’m still with that person. Am I with that person because I indeed love them, or with them because I feel guilty and responsible for their relationship ending as well and have a need to be in it. How do I distinguish which it is and if I’m in it because I’m in love and not feeling responsible? But the cheating part seems to be tearing me apart. At first it felt like relief and it was exciting to be with someone new and different but then I realized that I was open to different things with this new girlfriend and that they aren’t that different from one another, which is why so many experiences seem so much alike.

I’m hoping you can help me move forward. Stay in, get out, go back, distinguish, remove the guilt, be happy and alive with the not so new. I don’t feel a need to cheat, but I question whether I should be in this relationship, or with my ex, or on my own. In the end, I just want to move forward, somehow and for both of us to look in the mirror and know that we’re in the right place – together or not.

Thanks for the help.

You fucked up, dude.

You just learned, the hard way, what most people figure out independently:

I’m not sure if you’re looking for absolution or advice. I can tell you that your letter sounds like my wife’s first husband, who cheated on her and later married the person he cheated with. I’ve never talked with him and have no idea if guilt forced him to stay in the relationship. I will say this, however: his loss was my gain. No matter how great his current bride is, I’ll bet he realized that he screwed up and couldn’t do better than his first wife. And that by staying with her, he’s trying to prove to her, to himself, to the world, that he’s not such a bad guy, and that he didn’t cheat because of a mere “fling.” I’m sure it’s complicated, since you don’t even know why you’re doing what you’re doing.

Let your ex go. Your guilt is with you for life. You can’t fix the past, but you can make better choices in the future.

1. Let your ex go. She can’t trust you. Nor should she. You were willing to break her heart to cheat with another woman, and now you’re willing to leave the other woman to go back to her.

You’re probably not an evil guy, but you sure are selfish, and don’t seem to recognize the consequences of your selfishness until after the fact.

2. Your guilt is with you for life. You’ve earned it. You don’t get to wish it away. Like my wife’s ex-husband, you have every right to rebuild your life, but you have no right to sweep away the destruction you wrought when you cheated on your devoted two-year girlfriend for an entire month, and then dumped her. Hopefully this guilt serves a constructive purpose in the future about the meaning of fidelity — if not with this girlfriend, then a future one.

3. You can’t fix the past, but you can make better choices in the future. If you have no intention of marrying this girl, break up with her. Not to slink back to your ex, but to free your current girlfriend to find the man who wants to marry her.

Any woman that marries you despite your checkered history is willingly marrying a cheater, and therefore overlooking a LOT in order to trust you with her entire life.

If you stay with her, you have the benefit of hard-won wisdom — specifically the idea that no matter whom you marry, you’re going to have to make some compromises.

And so will she.

Any woman that marries you despite your checkered history is willingly marrying a cheater, and therefore overlooking a LOT in order to trust you with her entire life.

Whoever does this, appreciate her, cherish her and hold onto her.