Home > Blog > Cheating > Why Do I Date Men Who Are Cheating On Their Girlfriends? 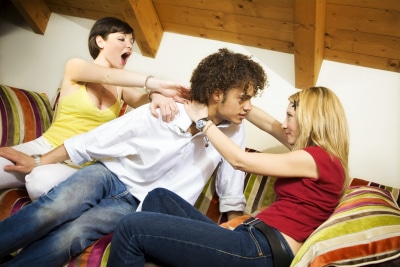 I have trust issues with men, and it can be very difficult to decipher when my concerns are legitimate or due to my own paranoia. I’m attractive enough to draw a considerable amount of male attention and have enough personality to keep them to develop what I believe to be serious relationships. But months later, I discover I’ve been wrong.

In my last relationship, I spent 3-4 nights a week at his house for months. I had a key to his apartment. I even met members of his family. And yet I STILL found out that he was engaged to another woman! And only because he’d forgotten to tuck away his anniversary card.

And before you say you’re not making yourself available to the right guys, I dated against type. I’ve been wined and dined by alpha jock types, I’ve done the light studio sessions will fellow artists. Hey, I’ve even done the really effeminate straight hair dresser (He had the nerve to ask me to reassure his lady that we had been using protection when we hadn’t.)   And yet I am still the back up girlfriend. HELP!   —Sharon

Your problem is the simplest one I’ve ever encountered in 4 years of writing this blog.

Of COURSE you have trust issues.

You have AWFUL taste in men.

You have seemingly NO sense of how a good man acts.

You probably wouldn’t recognize a man of character if he opened your car door.

Of COURSE you have trust issues. You choose un-trustworthy men!

So to properly address how to avoid this unseemly predicament in the future, it doesn’t start with spying on phone calls or snooping through drawers.

It comes with looking for patterns in your past, since you’re the only common denominator in your life and you’ve CHOSEN these men.

I’m no psychologist, but the obvious questions I have for you are these:

Which, I’m guessing, is not all that different than you, Sharon.

If I had your life experience and sample size, I, too, would come to the conclusion that men are liars and players and not to be trusted.

Instead of thinking you’re breaking your patterns by choosing men with different careers, why don’t you actually start choosing men based on ONE quality alone: integrity.

But if I were me (which, for the sake of today’s post, I am), I’d point out to you that there are over 50 million married men in the United States, and, logically, most of them are not cheating on their wives.

So that just means that you need to work on your picker.

Instead of thinking you’re breaking your patterns by choosing men with different careers, why don’t you actually start choosing men based on ONE quality alone: integrity.

If you make integrity as important as you make attraction, you will quickly discover that you have no impulse whatsoever to break into your boyfriend’s email.