My Husband and I Have a Comfortable Marriage Without Sex. 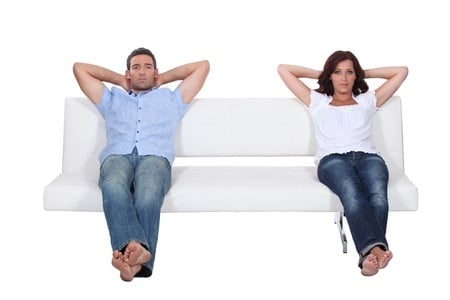 I am married to an honest, loyal and trustworthy man. However, we are not intimate in any way and there is no chemistry. At one point, we went over four years without any sex. It has always been like this and it is me who will eventually bring the subject up. When I didn’t talk about it, that’s when it ended up being such a long time. We are like best friends/brother and sister – living together. It makes for a great family life (we have two children aged 11 and 13) as there is little argumentative tension with regards to day-to-day stuff. My husband loves the family unit. It is me, however, who craves touch, intimacy and to feel desired. We have discussed this at length over the years and have tried to make things better (believe me). Unfortunately, my husband struggles to express himself sexually (so sex would happen only in the bedroom with the lights off). We have never held hands or been like lovers and, in my opinion, we were too young when we met – he was my first proper partner; I am a very different lady in my 40s with regards to confidence. As everyone sees us as the ‘perfect family’ and my husband as a wonderful man (which he is), I find myself more and more anxious feeling that this is not what I want for another 20 years. I am 43 years old and keep fit and young at heart. There are many reasons why we’ve stayed together – our children’s happiness, financial stability, our daughter is deaf and has needed support and it works day to day.

I feel terrible admitting it, but I want to feel loved in the true sense of the word and I don’t think my husband understands what I mean. Even if he did what I wanted now, I’m afraid I don’t feel anything sexual for him at all … is that just terrible? I am attracted to other men (and don’t have a low sex drive) but would sincerely like to change the future without being dishonest or causing too much heartache to everyone around me. I don’t want to talk to friends or family about this as I feel it is not fair by my husband to do so. If you can help me in any way, I would be SO grateful. I love your advice – it is truly brilliant.

You are speaking the fears of every woman who has ever been in a passionless relationship.

Unfortunately, you are also speaking the fears of every woman who has ever heard me talk about compromising on chemistry. And before I answer your question, I want to address that perception. It bugs me that after all these years of writing, I can’t get people to understand the nuance of the chemistry/compatibility debate.

What I have said, repeatedly, is that chemistry is a wonderful feeling. It consists of an increase in dopamine, serotonin, norepinephrine, estrogen, and oxytocin and makes you feel really high. This high — which we call chemistry or attraction — generally lasts from 18-36 months. And while it is a wonderful feeling, it is not the same as love, although most folks call it being “in love”. Additionally, this “in love” feeling is not necessarily a good predictor of your future, because, well, you’ve had it before in relationships that ultimately failed. So what I’ve observed as a dating coach is that people are slaves to chemistry, ignore compatibility (the ability to get along and build a future), and wonder why they’re so unhappy if they’re “in love”.

NO chemistry is just as harmful as no compatibility.

Are we on the same page so far?

The math is crude, but I hope you can see that one relationship is superior to the other.

b) When you’re planning a 40 year relationship, compatibility — the ability to compromise, make thousands of tiny decisions as a couple, and build a life together — is ultimately more important than white-hot chemistry.

Which brings us back to Liv’s original question and the source of much consternation from the 10 Chemistry people. What if there’s NO chemistry?

Well, the reason that I laid out this case before answering the question was to illustrate that NO chemistry is just as harmful as no compatibility.

Liv said it has “always been like this,” which means she ignored the lack of passion from the get-go, instead of realizing that a sexual connection is a necessary part of any marriage.

That is no different than two people who get married out of passion, only to ignore the fact that they fight all the time — and are then surprised they have a rocky marriage.

All relationships involve tradeoffs, but one should never give up on something as important as sexual chemistry — certainly not from the beginning like Liv did.

As to what you do now? I think it has to be a hard conversation with your husband, in which you figure out your endgame before you talk, and lead him to your desired conclusion.

2. Tell him that you feel sexually deprived. Tell him that while you love him dearly and have no desire to break up your family, you are starving for affection and don’t want to live the rest of your life without it.

3. Ask him to collaborate with you in coming up with a solution. This is a team effort to preserve your marriage AND make you feel sexually satisfied, and if he values your happiness, he has to help solve it.

What will you come up with? That’s up to you as a couple.

Maybe it’s sanctioned that you go on Ashley Madison to openly find sexual relations with another married man who isn’t going to leave his wife.

Maybe it’s sanctioned that you take a few long weekends each year to go away by yourself. What happens in Vegas stays in Vegas.

Maybe you do some research on male escort services and agree on a set amount of time you are allowed to indulge yourself.

Your partner is not upholding his end of the deal, and he needs to take responsibility for that, and do everything in his power to find a solution.

Do all of these things weaken the sanctity of your marriage? Probably. However, your partner is not upholding his end of the deal, and he needs to take responsibility for that, and do everything in his power to find a solution.

If he doesn’t — if he refuses to have sex with you inside the marriage and forbids you from being sexual outside the marriage — you have to ask yourself if you’re willing to keep this status quo for the sake of stability and the children. No one else can answer that except you.

Either way, I wish you well and thank you for illustrating that no sexual chemistry should be a non-starter in relationships, and that good people (men and women alike) will consider cheating if their reasonable sexual needs are not being met.