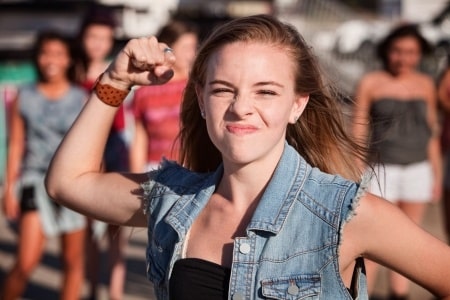 I was going to post this in the comments for my last blog, but felt it was worth its own post. It’s in response to another ad nauseum debate between two camps on this blog:

Women who think that everything is someone else’s fault and that everyone else should change. And women who understand that you can’t control anyone else’s behavior, all you can do is adjust to the world as it is.

Suggesting that all of you don’t value yourselves because you’re asking for dating advice? Suggesting that if you are happy with yourself, your romantic relationships should just fall into place?

If a woman is happy in herself she doesn’t need a man—and her relationship decisions spring organically from who she is at her best.

And then all of her relationships—with her lover or husband, her friends, her kids, her coworkers, whomever—will just fall into place.

Suggesting that all of you don’t value yourselves because you’re asking for dating advice? Suggesting that if you are happy with yourself, your romantic relationships should just fall into place?

I’m sorry, but my entire CAREER is proof that this is not true.

My clients are amazing. Smart, strong, successful, happy, confident. Relationship-oriented. Content being alone; would prefer to find a partner. Know that something’s not working. Want to learn what they can do differently. Reach out for my help in this most important of arenas.

How can you say that there’s something wrong with these folks?

Good, smart, self-aware people with high self-esteem can want a relationship and seek dating advice. That’s why I have a job, as do dozens of other dating coaches and matchmakers, many of whom are my good friends. If you think we’re preying on the weak, you don’t really understand what I do here. I’m not sure why I care about this, but I’m always baffled when people take offense to my reality-based dating coaching.

I realized recently that, as much as I write about dating and relationships, I’m not really expressing my opinions on how the world should be. I’m issuing my observations about how it IS.

It would be great if the hottest, youngest women on Match.com weren’t so self-centered and flaky. But they are. It would be amazing if short, fat, balding men with no money could have an equal shot at dating one of these women. In my experience, they don’t. I could spend all my time trying to change hot, young women into mature, soulful, generous and empathetic adults, but I’m powerless to do so. I could spend all my time railing against them for being judgmental about men’s looks and wallets, but I don’t.

I simply point out what I see.

So, if you, as a reader, feel personally indicted by anything I write, do me a favor:

Ask yourself exactly why you’re getting angry.

Chances are it’s not because I’ve lied or said something that’s factually untrue. It’s probably because I’ve pointed out some way in which the world works that you don’t like. Yet I don’t see what there is to get mad about.

I simply point out what I see. So, if you, as a reader, feel personally indicted by anything I write, do me a favor:Ask yourself exactly why you’re getting angry.

What You Can Learn From This: Don’t be surprised if 50% of guys don’t follow up. Stop sleeping with men if you can’t handle the consequences. That’s all you can control.

What You Yell at Me For: Men have no integrity. What’s wrong with them? Sex means something to me and it should mean something to him. Tell men to change because it’s really not cool to sleep with someone and not call her again. Men suck and you shouldn’t defend them for sucking. You should make them not suck.

Observation: Men don’t respond to women who are critical and boss them around.

What You Can Learn From This: The things that make you successful at work aren’t always effective in love. Alpha males usually don’t want alpha females. You get more with honey than you do with vinegar. Men like a soft place to land when they get home from work.

What You Yell at Me For: That’s not fair! Why do women have to change? What’s wrong with society? I’d rather be alone than be with a man who can’t take the fact that I’m strong and have strong opinions. I’m not somebody’s Stepford Wife. Why are men so intimidated by me? Men need to learn to change with the times because I’m not going to be subservient to a man. I’m not changing for anyone.

What You Can Learn From This: Men reveal themselves in their efforts. They don’t always know where a relationship is headed. You have to be patient and allow him to choose you. Trying to define your future too soon will invariably backfire since men don’t like receiving pressure. It only makes you look weak and doesn’t make him want to commit to you. Commitment is a great goal, but men like to buy – they don’t want to be sold.

What You Yell at Me For: I don’t want to waste my time on a man who isn’t marriage minded. He should know after 3 dates if he wants to be my boyfriend. He should know after 6 months if he wants to marry me. And I have a right to learn this information as soon as possible. If he doesn’t like the fact that I’m asking about “us” too early, he’s not the guy for me. Why are no guys sticking around?

The simple fact is that all of the free advice I dole out on this blog is simply observations about male behavior. I don’t endorse or condone it. I observe it.

We can go on and on with this, but the simple fact is that all of the free advice I dole out on this blog is simply observations about male behavior. I don’t endorse or condone it. I observe it. Yet all of the things about which we argue are things that you CAN’T CHANGE.

Don’t forget: I am a dating coach for smart, strong, successful women – most of whom are 35-55 and are serious about finding love.

Which one are you going to be?