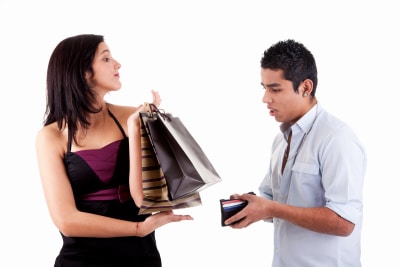 Hello Evan. I recently started dating a girl. I really enjoy her company and she enjoys mine. We get along fine, we’re really into each other and we share many commonalities. There’s only one issue – money! I have absolutely no problems taking her out on dates and footing the bill 100% but we’ve been on about 5 dates and we’ve hung out with mutual friends on numerous occasions, but she never even offers to pay – not even a disingenuous offer. I understand that if we are happy, then money is a small price to pay, but I barely finished college and only make $40,000 a year. I cannot afford to spend $200 every weekend. I mean, even when we’re not on dates, she expects me to pay. I don’t know how she got this old fashioned mindset, but it’s really starting to bug me. Personally, I work just as hard as she does for my money and I don’t find it fair but at the same time, I find it too early in the relationship to bring it up. I just don’t want her getting the idea that I’m ok with it or that she can take advantage.I don’t even expect her to pay half. If we go out to dinner, I’ll pay for the date and the dinner, but the least she could do is pay for our ice cream or maybe buy me a single drink? I want to have that feeling, like if we’re at a bar and my girl comes up to me and asks me what I want. It’s like she has my back. It’s not about the cash- it’s more about being appreciated and not taken advantage of. I do not know how to approach the situation. I know she is going to explode if I bring it up, but how much of this should I take? I am not cheap, but at the same time, I am not made out of money. Does it make me a bad person to be thinking this way? I am somewhat of a liberal, progressive thinker, and her traditional mindset seems backwards to me. Advice? —David

We’ve established that men and women are equal.

Thank you, David, for writing a question that addresses the very hypocrisy of modern-day dating.

We’ve established that men and women are equal.

We’ve established that the concept of men paying for dates came from a time when women didn’t work and therefore men HAD to pay.

Which leads this blog to receive comments that read like this:

“In our society, it has always been customary for a man to pay for a woman’s dinner. Men are wired to protect, and take care of a woman. If he doesn’t want to pay for dinner that is a glimpse into his character and/or how he was raised. Any self-respecting woman should steer clear of such a man. It doesn’t matter if she has decided not to see him again before she even picks up her fork. If he is a gentlemen, he will gladly pay and expect nothing in return.”

Anyone who feels that way should go back and read David’s letter.

Stop acting like you’re six-years-old and don’t have a purse with cash and credit cards in it.

This is a liberal, progressive thinker — a good man of modest means — who is trying to do the “right thing” and pick up the check as the anachronistic rules of chivalry still dictate.

He’s not railing against the concept of picking up the tab while he’s courting her — he’s just annoyed that he feels taken for granted. And when a woman never reaches for the check, offers to split, or insists on picking up the tip, the cab, or the coffee afterwards, it can really start to wear on a guy.

So stop acting like you’re six-years-old and don’t have a purse with cash and credit cards in it.

Stop acting like you’re not really his equal when you want to be treated equally in every other respect.

I’m not expecting much dissent on this one, but if you’re brave enough to explain why the original poster David is wrong, cheap, or short-sighted, have at it.

Personally, I think he speaks for just about every man I’ve ever met who got sick of being an ATM.

Here was my breaking point — when some woman intimated that she was my “sugar mama” after I allowed her to split the check on our fourth date.