I Keep Scaring Guys Away. What Am I Doing Wrong? 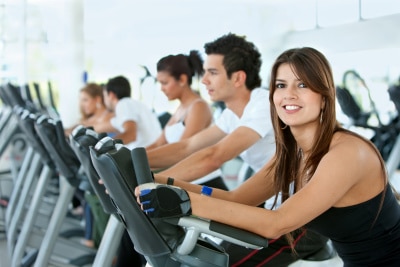 I’ve tried going after guys I’m attracted to even if I don’t really know them. For instance, there was this guy in the gym. I guess I creeped him out. I don’t know why… maybe he found me unattractive… who knows? But I kept trying to talk to him and he would run away because we were on the running track. He was kind of a jerk and then I caught him near the barbells where the men work out and I said “Hey,” he seemed like he was nice because he smiled at me, took off his headphones and said “What’s up?” I asked him why he was running away from me. He didn’t give me a direct answer but he said “I can talk to you 20 minutes from now” with a smile and he said he was going to work out… Well, he ended up ditching me. He had me wait an entire hour and then he quickly walked past me without looking back at me.

Now I’m wondering… what did I do wrong? Was there something different I could have done when approaching him? Is he just a jerk (probably)? Next time I see him, should I talk to him again?

Also, I want to talk to this guy at my Church but I’ve had so many rejections that I’m wondering if I should even talk to this guy or if I will scare him away too. I’m not really confident that he will like me.
—Ashley

Stop being a guy.

Since third grade, boys are taught that if they like a girl, they have to ask her out.

Before you get defensive — or before any women get on my case for invoking more gender stereotypes, let’s establish that stereotypes are stereotypes for a reason.

Since third grade, boys are taught that if they like a girl, they have to ask her out. Or pull her hair. Or something like that.

It never ceases to be nerve wracking, but that, in fact, is the way a vast majority of the dating world works.

Man sees attractive woman, gets the nerve to talk to her, they have a nice conversation, he asks for her number, calls her, plans the date, picks her up, pays, drives her home, kisses her goodnight, and calls the next day to see if they can do it all over again.

I don’t see much room for disagreement with this one.

That doesn’t mean that it’s impossible for women to approach men, ask out men, offer sex to men, or propose to men; it’s just that it seems that most men and women are comfortable with these gender roles. And when they’re undermined, many people get a little ruffled.

If so, you’re buying into these same stereotypes of what we expect from men.

As for what men expect from women?

We just want you to say yes.

This is the core message of my book, Why He Disappeared. It’s not that you’re “wrong” to approach men the way you have, Ashley. It’s that it hasn’t been proven to be particularly effective.

So why keep doing something that isn’t working for you?

Men do what we want — most of the time. There’s always going to be some guy who’s too shy to say hi or ask for your number, but most women don’t want a man with that little confidence anyway.

Your job is simply to put yourself in the position to be approached.

Cross the room near him. Plant yourself within eyeshot of him. Turn. Smile. Make eye contact. Look away. Flip your hair. You’re essentially giving him every opening to approach YOU. If he does, then YOU’RE in control. If he doesn’t, he’s not interested.

And if you really, really want to keep on approaching guys, click here, and scroll down to read Samantha Scholfield’s Screw Cupid which teaches women how to approach hot guys. For the more laid back system, which involves getting men to come to you, I’ve heard that Mama Gena’s School of Womanly Arts is a good read.