What Signals Are You Giving For A Man To Approach You? 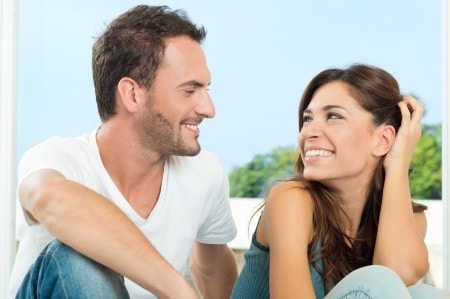 Had lunch yesterday with an amazing entrepreneur, Kristin Moore, who is the founder of a site that designs witty t-shirts that signal that you’re single. I’d met her at my friend Dr. Alex Benzer’s book signing last week, and she mentioned to me over my tuna wrap that she also has a blog.

Kristin put some of Dr. Alex’s advice into practice, performing a social experiment of sorts: how many men would she meet if she sent out a ton of non-verbal signals one night?

Well, I checked it out and saw that Kristin put some of Dr. Alex’s advice into practice, performing a social experiment of sorts: how many men would she meet if she sent out a ton of non-verbal signals one night?

The answer was illuminating. But first, check out the signals she was instructed to use:

1. Smiling at him broadly
2. Throwing him a short, darting glance
3. Dancing alone to the music
4. Looking straight at him and flipping hair
5. Keeping a fixed gaze on him
6. Looking at him, tossing head, then looking back
7. “Accidently” brushing up against him
8. Nodding at him
9. Pointing to a chair and inviting him to sit
10. Tilting head and touching exposed neck
11. Licking lips during eye contact
12. Primping while keeping eye contact
13. Parading close with exaggerated hip movement
14. Asking for his help with something
15. Tapping something to get his attention
16. Patting his buttocks

They’re not all subtle, but studies say they are effective. Sure enough, Kristen had 4 guys approach her and ask for her number in one night. Consider this the next time you say “no guys hit on me”, okay?

More importantly, have an amazing weekend. I’m celebrating my birthday with my wife and friends on the beach in Santa Monica and will do everything in my power not to think of work while I’m there…

This website uses cookies to improve your experience while you navigate through the website. Out of these, the cookies that are categorized as necessary are stored on your browser as they are essential for the working of basic functionalities of the website. We also use third-party cookies that help us analyze and understand how you use this website. These cookies will be stored in your browser only with your consent. You also have the option to opt-out of these cookies. But opting out of some of these cookies may affect your browsing experience.
Necessary Always Enabled
Necessary cookies are absolutely essential for the website to function properly. These cookies ensure basic functionalities and security features of the website, anonymously.
Functional
Functional cookies help to perform certain functionalities like sharing the content of the website on social media platforms, collect feedbacks, and other third-party features.
Performance
Performance cookies are used to understand and analyze the key performance indexes of the website which helps in delivering a better user experience for the visitors.
Analytics
Analytical cookies are used to understand how visitors interact with the website. These cookies help provide information on metrics the number of visitors, bounce rate, traffic source, etc.
Advertisement
Advertisement cookies are used to provide visitors with relevant ads and marketing campaigns. These cookies track visitors across websites and collect information to provide customized ads.
Others
Other uncategorized cookies are those that are being analyzed and have not been classified into a category as yet.
SAVE & ACCEPT
74 Shares
Tweet
Share74