Home > Blog > Confidence > Take Action > How Can I Tell My Girlfriend Her Emotional, Bad Behavior Is Not My Fault? 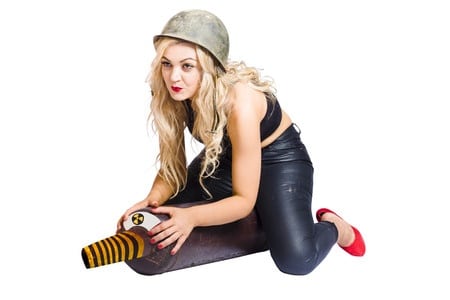 This is a question about splitting up. My girlfriend has been irrational and cruel; we’ve actually split, but I want to explain to her that her emotions and the way she reacts aren’t the fault of other people, only she can control her reactions. I’ll give you an example of something that happened earlier this year. This is by no means the only thing. I fully understand that I am soft and an easy push over.

I took my girlfriend away for a long weekend with some friends to France. We arrived at the hotel on the Friday afternoon and met my friends for drinks, they invited us out for dinner but we were too engrossed in each other and we didn’t leave the room. We made love that night and again in the morning. We went out the next day with my friends and had lunch. At that point one of my friend’s wives asked which cocktail dress another was going to wear that night to dinner. I hadn’t been told it was a black tie dinner, I had a lounge suit and my girlfriend had a nice dress but not a cocktail dress. She was obviously upset. We got back and she wound herself up to the point where she said we can’t go to the dinner. I went down to the bar where my friends were and I said “we’re not coming” explaining the issue. Several of the guys told me that their wife or girlfriend also didn’t have a cocktail dress, they didn’t like them or just didn’t own one. I went upstairs and told my girlfriend and she agreed to come down for dinner.The elevator arrived in the lobby and the doors opened, I was nearest so I exited first, I was two steps into the lobby when she screamed “I can’t do this”, got back into the elevator, the doors closed and she was gone! I was flabbergasted. My friend’s wife went after her but couldn’t find her, the room door was locked and I had the key. I went to look for her, couldn’t find her, I asked the desk staff to let me know if they saw her and I went down to the banqueting hall, the last to arrive, to be told to relax, she was there.

My friend’s wife had found her and lent her a dress, apparently she was hysterical before appearing for dinner, it was all my fault and she said other things about me that my friends wife wouldn’t tell me. We ignored each other for a while but as the conversation around the table flowed we began to talk and by the end of dinner we were talking normally, as though nothing had happened. I was being weak because I was in love. Most guys I know would have finished the relationship right there, but I was also confused. We left the table and she said she was going straight to the room and not coming for drinks with everyone. Possibly too embarrassed, but still making out that it was my fault. I went for drinks with my friends with every intention of dumping her in the morning. I eventually got back to the room to find her naked in the bed.I ignored her until the morning because I was still fuming. When it was obvious I was awake she asked me if I wanted a cuddle. Really, I wanted to dump her right then, but then I thought about how awkward the drive home was going to be. We had the most exciting sex I’ve had for 20 years; it was amazing. Was she guilty for her behavior the night before? I dared not talk about what had happened because I was scared she’d dump me. Now that I’ve finally finished with her I want her to understand that her reaction was not normal, and it really wasn’t my fault, she has to take ownership for her actions and re-actions. How can I do this without the emotion turning it into an argument or a session of criticism?

I had the SAME EXACT THING happen to me in the summer of 2000.

The brief version: we were dating for three months.

We were going to a friend’s wedding in Catalina Island. My new girlfriend was very attractive and very vain, but I had no idea how emotional she was. I quickly learned.

The girlfriend was very judicious in what type of dress to wear to a late Sunday afternoon wedding. Can’t wear black. Can’t wear white. Red is too showy and might upstage the bride. So she finally decides on a silky lavender number. She’s happy. She looks great to me. It’s all good.

Until we arrive at the wedding and learn that her dress looks almost EXACTLY like the bridesmaids. It was objectively pretty funny because she tried SO hard to choose the right outfit, but hey, what’re you gonna do, right? Smile, have a laugh, and get on with the night…

That’s not quite how it played out.

Suddenly, I was at a wedding, all by myself where I knew no one but the bride— simply because my girlfriend was upset at her wardrobe choice.

I left the wedding, returned to the hotel room for 2-3 hours of arguing and crying, followed by our usual hot sex.

I stayed with her for three more months — and watched her storm out of both fancy restaurants and cocktail parties, leaving me alone, embarrassed, and, inevitably, chasing after her.

Why did I do it? Same reason anyone stays in bad relationships:

She was the most attractive woman I’d ever dated.

The sex was great.

I thought I was in love. She was a good girlfriend 80% of the time.

But that 20%? Holy shit. She said some of the meanest things to me I’d ever heard before I became a dating coach. 🙂  To this day, I wish her well, but pray she learned to manage her emotions a little better — or, at the very least, find a partner who doesn’t trigger her anger so much.

So when you write me this, Jonathan:

“Was she guilty for her behavior the night before? I dared not talk about what had happened because I was scared she’d dump me. Now that I’ve finally finished with her I want her to understand that her reaction was not normal, and it really wasn’t my fault, she has to take ownership for her actions and re-actions. How can I do this without the emotion turning it into an argument or a session of criticism?”

I have only one word for you:

Don’t try to prove your innocence.

Don’t try to teach her the error of her ways.

Don’t be her psychologist, dating coach, or even her friend.

She’s way too wrapped up in her feelings of “being right” to listen to reason, and it will only serve to enflame the situation, create aggravation, and trigger her anger all over again.

If you have a dramatic partner, there’s no fixing it. You will just ride the roller-coaster until you get sick and it throws you off.