How Do I Start a Conversation with a Straight Single Man? 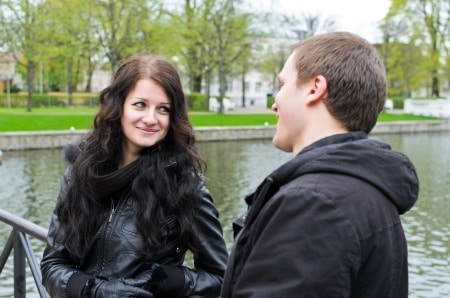 I’m a 42 year old woman, newly single. I’m just re-entering the dating fray for the first time in many years, and I discovered very quickly that I have no idea how to identify men my age who are single and looking. They sure seem to be scarce, compared to when I was in my twenties! I’ve chatted up guys who turned out to be gay or attached – they were just extremely friendly/chatty, which I occasionally mistake for an interest in me. And I’m too shy to laugh off any misunderstanding with a comment like, “Well, if you have any single brothers or friends, here’s my card!”

I’m dating online, but I’d also like to meet people in other ways.   Yes, there are the singles events, the frozen food aisle during off-peak hours, etc. But for other situations I may find myself in – elevators, gyms, coffee shops – do you have any suggestions on how I could strike up a breezy, innocuous conversation and still be able to “out” single men?   The “Wow, nice jacket – did your partner pick that out for you?” line doesn’t seem too subtle.

Thanks very much for any insights.

Enjoy your blog, loved your book.

Love your attitude, Linda. It’s tough out there, all right, and the healthiest approach is to do exactly what you’re doing. A combination of online dating, singles events, and real-life interactions, all of which create the greatest number of opportunities to meet single men.

That said, it’s not your job to “out” single men.

Because single men have been socialized well enough to know that it’s their job to initiate conversation with you. And if they don’t, they’re going to go home alone AGAIN. I’m not suggesting that this is a biological imperative or that nothing good has ever come from women asking men out. Still, as a dating coach, I’m a big believer that your primary job is to create the opportunity, not to seal the deal.

Your primary job is to create the opportunity, not to seal the deal.

To sum up, it’s not your position to ask him out. All you have to do is make eye contact and smile. This gives him   permission to come over without being afraid of being shot down. Because that’s every guy’s concern, especially nice guys. We HATE feeling like fools. We HATE rejection. And we’d just as soon not even approach you, since it’s easier to go home and say, “Man, I wish I said hi” than it is to put our fragile egos on the line. The only way to get an insecure guy to come over is to let him know it’s going to be okay if he does.

Rachel Greenwald discusses her proactive approach for women in her book, and my friend David Wygant’s book “Always Talk to Strangers” is also illuminating, although it’s more written for men. But it sounds like you really have two questions, Linda — you want to “out” single men and you want to find pithy pick up lines as well….

And not that I’m any sort of pickup artist, but the best pick up lines are entirely contextual — meaning, they arise in the moment. If you’re plotting your line in advance, it’s likely to come across as canned. Once again, David Wygant gives excellent advice about meeting people organically. Just know that when you’re striking up conversation with a stranger, the stakes are low. Desexualize the situation and just start talking about what’s in front of you and voila — you’re in.

“I always get lost in supermarkets — you wouldn’t happen to have a map to the organic tomatoes, would you?”

“Jack and Coke, huh? Maybe I can teach you to drink it straight.”

Whatever. All of this is the equivalent of the famous party opener, “How do you know the host?” It’s safe, it’s non-threatening, and suddenly, you’re just talking. You’ll learn later whether you have mutual interest.

If he doesn’t show interest or offer to take your number, you’ve got your answer.

So stop being so hard on yourself. Apart from looking for a wedding band, the ONLY way you can out a single guy is to let him out himself. If he doesn’t show interest or offer to take your number, you’ve got your answer. Don’t worry about “wasting” time chatting with gay men or taken men — it’s all good practice, and the more comfortable you get bantering with strangers, the more it’ll pay off when they’re actually single and straight.