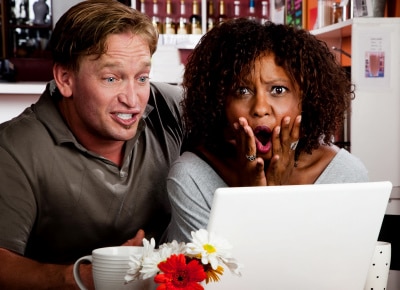 Do women have it a lot easier than men, and do hot people in general have it the easiest? I know what you might be thinking: yes and yes. It’s hardly the unsolved question of the century.

However, it’s always good to back up hypotheses with facts, and that’s what Jon Millward did with this experiment, posted on his eponymous blog. Millward created 10 fake OKCupid profiles with similar sounding usernames, with the same written profile, personal stats, level of education, etc. The only difference? Each account had a different photo of a man or woman of varying attractiveness.

In online dating, we have the “perception of choice”, but not actual choice itself.

What he discovered isn’t particularly revelatory, but it does echo something I’ve said here repeatedly about online dating – we have the “perception of choice”, but not actual choice itself.

“The expanded horizons offered by online dating don’t equal unrestricted access to a ready and waiting list of beautiful people. Every man and woman online still has criteria that must be met by people who want to date him or her, and every guy and girl is still in direct competition with every other person of their gender… Whereas before a man just needed to be the best looking guy at work to get a date with a colleague, now he needed to be in the top 10% of all men to get a date with one of the women in his city.”

This is the double-edged sword of online dating. You have far more access to singles than ever before. But so does everyone else. Which means that there’s also far more COMPETITION.

Especially when it comes to men trying to write to women. For all the talk about “The End of Men” and how gender roles have been obliterated and women can write to men first, blahblahblah, here’s what ACTUALLY happened after four months:

– The women as a group received over 20 times more messages than the men.

– The two most attractive women received 83% of all messages.

– The two most attractive women probably would have received several thousand more if their inboxes hadn’t have reached maximum capacity.

And what do men write? Well, you’ve seen this a few times before:

“Most men compliment the attractive women a lot, they make reference to something in the woman’s profile (you would not believe how many times men mentioned the party tricks and ‘Arrow’ the cheetah from the generic profile I wrote), or they ask a general question about travel or something equally boring.”

What SHOULD he write instead? In case it’s not obvious: Demonstrate creativity, intelligence and a great sense of humour

– Be totally different to anything she may have received before
– Be obviously unique and not a cut-and-paste job
– Show that I’ve read her profile and absorbed facts about her
– Not be needy!

I have dedicated an entire volume of my bestselling audio series, Finding the One Online to how to write emails just like this.

Online dating may be a jungle, but it’s a jungle with a LOT of single people, so it’s best to learn how to master the process.

As a woman, your takeaway is that while you may get frustrated at the lack of quality responses, put yourself in a man’s shoes. He has no idea what to write in his first email to you, and he’s competing with hundreds of men for your attention. Be patient, write a better profile, and learn not to get so frustrated with men, and you can enjoy online dating a lot more.

As a man, your takeaway is that the competition is fierce, and thus far, you have not been up to it. Stop blaming Match or women or your city for your failures and learn to market yourself more effectively.

If you’ve been frustrated with your online dating experience, click here and I’ll help you change your tune.

The full study can be seen here.