Were you ever in a draining relationship in which you felt that you gave too much? Have you considered that you should probably give less to your partner in the future? It’s a painful problem, but giving less isn’t the solution. Choosing a better partner is.

Were you ever in a draining relationship in which you felt you gave too much? Have you considered that you should probably give less to your future partner? It’s a painful problem. But giving less isn’t the solution. Choosing a better partner is.

I’m Evan Marc Katz, Dating Coach for Smart, Strong, Successful Women, and your personal trainer for love. Welcome to the Love U Podcast. Stay to the end of this video to learn the only kind of man you should marry. When we’re done, I’ll let you know how you could apply to love you to create a passionate relationship that makes you feel safe, heard, and understood.

So, I got a client. She’s in Love U. Her name is Jessica, and Jessica was telling me her story when we first started coaching. And her story is a heartbreaking one and it’s a common one. Jessica felt drained. She was in a 22-year marriage with a man who didn’t appreciate her at all. They had a few good years at the beginning, but after the kids were born, everything sort of came apart. He was focused on making money. She was focused on raising the kids. And they fell into their roles. They stopped communicating with each other. They stopped having sex. They stopped being what they were in their life when they were going through courtship. And they turned into what happens to couples, glorified roommates with very separate roles in the house. And eventually, it fell to Jessica because women are often the emotional caretakers and relationships that fell to Jessica to try to make things better when she realized they were leading separate lives under one roof. She tried. That’s important to recognize. Jessica tried. She encouraged her husband to go golfing with his guy friends. She made dinner for him regularly. She initiated sex even when she was tired. She was patient with his mood swings, gave him space to rant after a day at work. She essentially became the mother and the father of the household. She was running everything, taking care of the kids, taking care of him, not taking too much care of herself.

So, if she had a cup, it was like the cup was draining. It was like it had a hole in it. Nothing was replenishing her. And her husband for two decades didn’t say thank you. Never reciprocated her efforts. Never told her she was beautiful. Never came to her to figure out how he can do his part to make their relationship better.

And so, Jessica, my client, early 50s wasted most of her adult life in an emotionally dissatisfying marriage where she would give and give and give and give and never really receive anything in return. Does that strike a chord with you? If it does, I’m really sorry, but I’m very glad you’re listening today because it may be tempting the next time around to conclude that all men are like your ex, selfish takers with little capacity to listen or act from a place of generosity. But that’s not true. It may also be tempting to conclude that the reason your relationship went bad was that you gave so much. That’s also not true.

The problem is that you’ve been giving it to the wrong person.

Being a giver is essential in any relationship. My wife is a giver. I am a giver. Neither of us keeps score. And that’s why both of us win. So, the problem here as I see it, and I would like you to see it too, is not that you’re a giver or that you give too much. The problem is that you’ve been giving it to the wrong person. You’ve been expending enormous amounts of emotional energy on giving to a taker. And a taker will always take and see how much he can get without giving in return. As long as you keep giving, he has no incentive to stop taking. So this is a losing battle that you can’t turn around since you can’t change a man’s character. But if you date a giver yourself and you give it back to him in equal measure, now you’ve got a formula for a happy marriage.

In my second book, 2006, I called it The Platinum Rule. If the golden rule is to do on to others, the platinum rule is to figure out how to do better. Each day I get out of work here by five thirty or six o’clock. I wonder how can I make my wife’s life better. I’m not saying that’s normal for every husband. I listen to women every day. So, I really try to apply the stuff I do here. But I do ask how can I make my wife’s life better? Maybe it is just listening to her vent for 15 minutes about the day she had with the kids. Maybe it is by doing the dishes or folding the laundry to take the burden off of her. Maybe it’s just by sitting by her side and zoning out in front of the TV because she just does not want to talk. But in that time, it’s not about me. It’s about her. When I make it about her, when I give my wife what she needs, what do you think is gonna happen? Happy wife. Happy life.

The person who is a giver in this instance, me, builds up a reservoir of goodwill and discovers in turn that she’s going to receive just as much back. Not if you’re with a taker when you’re a taker, it doesn’t work. But if you’re with a giver and you give to a giver. Now you’ve got a recipe for a great life, but it takes choosing wisely with your man. Choose a taker, you’ll always be on the losing end and have your cup perpetually drained with no one filling it. But if you choose a giver and you give back to him, I guarantee you your gonna be happy. Just you watch.

My name is Evan Marc Katz.

Thank you for being a part of the Love U Podcast.

If you’re listening to the audio podcast, please scroll below, leave an honest review for Apple. More reviews equals more awareness of the Love U Podcast and more listeners means more love in the world. 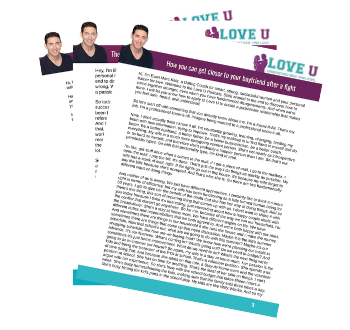