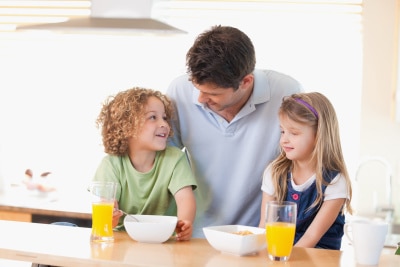 I sent this article to my intern. She set it up on the blog with the title “Study Shows Fathers Spend 50% Less Time on Parenting”.

I’m telling you this because it’s a fascinating microcosm of how statistics can be used to illustrate almost anything, depending on your perspective.

While more women are working full-time than ever before, that does NOT mean that this is what most women actually WANT.

The REAL reason I posted this article, of course, was not to illustrate that Moms are better than Dads at child-rearing – what constructive good could come out of that?

I posted this piece from Pew Social Trends to reveal that, in general, men and women have different thoughts about what they want their domestic lives to look like.

For example, “While a nearly equal share of mothers and fathers say they wish they could be at home raising their children rather than working, dads are much more likely than moms to say they want to work full time. And when it comes to what they value most in a job, working fathers place more importance on having a high-paying job, while working mothers are more concerned with having a flexible schedule.”

It’s important to emphasize this. While more women are working full-time than ever before, that does NOT mean that this is what most women actually WANT.

“Only 16% of adults say the ideal situation for a young child is to have a mother who works full time. A plurality of adults (42%) say mothers working part time is ideal, and one-third say it’s best for young children if their mothers do not work at all outside of the home.”

While my intern put the emphasis of the article on statistics like this: “Analysis shows that fathers devote significantly less time than mothers to child care (an average of seven hours per week for fathers, compared with 14 hours per week for mothers),” such statistics are incredibly misleading about the larger trends, which show that men are doing nearly three times more childcare than they were in 1965 and two and half times more housework, while working almost the same number of hours.

As for women, they’re doing 14 hours LESS housework and putting those hours instead towards PAID work, something that was far rarer in 1965.

The real fact is that, in order to have a successful partnership, SOMEONE has to work less and take care of the house and kids. And if you’re a career woman who does not want to take her foot off the gas, god bless you. No one is judging. It just means you’d better find a man who is willing to work part-time to handle domestic duties.

Or marry really rich, which is what most of my clients are still trying to do. 🙂

Read the report here and share your thoughts below.