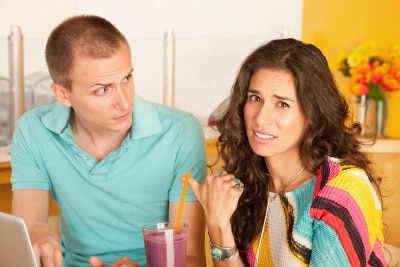 If I had a dollar for every one of these filling my inbox, I would have, well, a dollar.

Unfortunately, your smart, funny, attentive boyfriend has a fetish for chicks with dicks.

But I am experienced and I am intuitive and I am hoping that what I’m about to tell you gives you strength and courage.

I’m not saying this because I’m homophobic. Some of my best–okay, that’s not true. But I’m really not judgmental about people’s sexual preferences, as long as they have no negative impact on a partner.

Unfortunately, your smart, funny, attentive boyfriend has a fetish for chicks with dicks. And it’s not a particularly slippery slope to see how that might cause a problem for you down the road.


Because it’s one thing for a guy (or a woman, for that matter) to say, “Here’s my kink. I hope you can play along with it. Or at least appreciate that it’s what I fantasize about in my free time.”

It’s another thing when he’s taking your time together to indulge his kink without you.

It’s another thing when he’s openly questioned his own sexual identity and sort of/kind of decided he might like women.

It’s just a few too many red flags for my taste.