If you’re interested in the scientific roots of this discussion, as I am, please click here to read David P. Schmitt’s lengthy article “Sex and Gender Are Dials (Not Switches)” in full.

I share it because, as a dating coach who reads incessantly about gender, sex, and relationship dynamics, I want to ensure that I’m giving the most informed, responsible advice. One of the things that underlie my advice is that, while men and women are equal, they are different biologically. Of course, one look below your waist would tell you that, but the way the online dialogue goes these days, it bears repeating.

Gender discrimination is wrong on a personal level, a societal level, and an institutional level. Anyone who doesn’t acknowledge that is harboring an ill-informed, black and white view of the world.

Gender discrimination is wrong on a personal level, a societal level, and an institutional level.

At the same time, where did we get the idea that sex/gender is a mere societal construct? That little boys and girls are like blank slates with NO biological differences? That’s complete bunk – and it’s bunk that’s been thoroughly debunked by scientists.

If we can’t understand and acknowledge the broad overall differences between men and women, it becomes nearly impossible to grapple with modern dating dynamics.

Sometimes, stereotypes have a place in this world; what we don’t want to do is assume that EVERY member of a group adheres to the same stereotype. Cue Dr. Schmitt:

“Although male/female, masculine/feminine, androphilic/gynephilic, and so forth might be scientifically useful as overall summaries (a sort of shorthand until we figure out what is really happening), massive amounts of sexual diversity exist under that surface-level description. The underlying variation is not random (cisgender men are usually more masculine and gynephilic, on average than cisgender women), but a lot of hidden and scientifically important sexuality exists underneath sexual labels. Scientifically, this is a problem.”

This is why it’s so tricky to discuss. And this is why Schmitt refers to sex and gender as dials instead of switches. Despite the fact that there are obvious gender differences as a whole, there  is wide variance within both men and women.

“According to the  organizational hypothesis  of sex differentiation, a key cause of male-female sex differences is the prenatal experience (or lack thereof) of androgen-related brain masculinization. In humans, a critical gestational period exists during the second trimester during which male brains, but typically not female brains, are permanently altered in function and structure in ways producing masculinized physical and psychological traits (e.g., personalities, cognitive abilities, play preferences).

Perhaps as a result of these differential  in utero  exposures to testosterone, when we look around the world we find across all (or nearly all) cultures that men and women differ, on average, in many regards. Ellis (2011) documented 65 apparently universal sex differences in cognition and behavior, ranging from preferences and attitudes to interests and abilities. 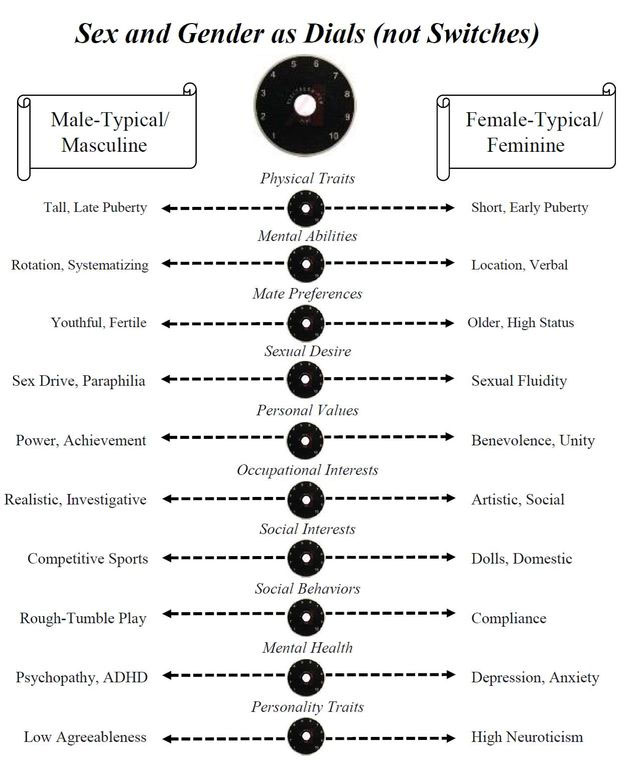 If those sound too much like stereotypes, how about we redefine them as heuristics? A heuristic is “any approach to problem-solving, learning, or discovery that employs a practical method not guaranteed to be optimal or perfect, but sufficient for the immediate goals.”

So we can rightfully state, in the same breath, that  women are more verbal, more social, less aggressive, and more anxious  AND that this doesn’t apply to each and every woman.  Says Schmitt:

“Yes, evolutionary selection pressures may lead male sexual identity to generally be co-aligned with other expressions of masculinity (e.g., a deeper voice, Puts et al., 2016; a stronger sex drive, Baumeister et al., 2001; more interest in competitive  team  sports; Deaner & Smith, 2013), but evolution in sexually-reproducing species allows for a lot of variation along the many sex/gender dials (due, for instance, to sexually-antagonistic selection pressures; Stearns et al., 2012; Stulp et al., 2012). Sex/gender dials do not all need to be turned “all the way up to 11” for evolution to play a role in producing human sexual diversity.”

So we can rightfully state, in the same breath, that  women are more verbal, more social, less aggressive, and more anxious  AND that this doesn’t apply to each and every woman.

You may find  my approach to this topic to be didactic, and you may be right. I just think that it’s essential that we converse using the same set of facts. Facts shouldn’t be subject to one’s feelings or biases. Nor should they be twisted to enact some sort of agenda. They should just stand on their own. I’ll let the author get the last word.

“From an evolutionary perspective, it is extremely unlikely  there is  one “gender switch” adaptation that invariably gives rise to essentialist, determined, and dichotomous male and female psychologies. Wrong, wrong, and wrong. Rather, there are likely dozens (if not hundreds) of evolved sexuality adaptations, each turning the sex/gender dials of men and women in oblique, context-sensitive ways, each contributing a small part in generating the wonderful sex and gender variations observed in our species, all around the world.”

Why Can’t Men Refrain from Looking at Photos of Sexy Women and Fantasizing?

You’ve been hurt. You’ve lost. And you felt insecure with all the sexy women online. You keep on thinking why …

Discover why quality men choose some women and not others so you can finally meet your Mr. Right.
171 Shares
Tweet
Share171