How Can You Attract and Keep the Right Guy?

You were delighted when I told you how to tell if a man was falling in love with you.

You were thrilled when I told you when to dump a non-committal guy.

I think you’re going to be challenged by what I’m about to tell you in my next video.

We’ve long ago established that the definition of insanity is doing the same thing over and over again and expecting different results.

That describes most of us when it comes to dating and relationships.

Over and over, you plug away, trying to make things work, even though it should be readily apparent by now: there’s not necessarily something wrong with YOU, nor is every man in your life fatally flawed. The problem is how you two work as a couple.

Lobster and cinnamon come to mind.

That may sound a little cold and cerebral to you, but I hate to tell you, following your heart has caused pretty much all of your relationship troubles. If love is blind, it’s my job to take the blinders off and let you know how to make slight adjustments that will lead you to greater happiness.

And let me be the first to tell you, greater happiness doesn’t rest in choosing a guy who’s just like you. My mantra to women is to look for a complement, not a clone.

This may not come naturally to you, especially if you’re a smart, strong, successful woman who thinks that you “deserve” a man who is smarter, stronger, and more successful than you are.

Essentially, you’re trying to date yourself, with a penis.

That kind of thinking is a huge blind spot for many women.

(Just imagine if men said the same thing: “I need a woman who is smarter, stronger, and more successful than I am.” No one would ever be able to settle down because everyone would be trying to trade up!)

This creates a conundrum for women who consider themselves in the 90th percentile of everything. In other words, the number of men who are taller, smarter, richer, is going to be a small fraction of the population. (Consider: 15% of men are 6 feet tall. 10% have masters degrees. 2% make over 200K, etc.)

Furthermore, these prime specimens of man meat are NOT necessarily looking to date female versions of themselves.

What happens when you catch one of these Bill Clinton/Tiger Woods type men?

Well, consider the personality type of a guy who is busy, driven, and wealthy. He’s demanding. He’s used to getting his way. He’s a conqueror. He’s not big on compromise. He doesn’t think the rules apply to him. And he’s got an endless supply of female suitors. Add those all up, and you have a man who is really hard to land for a successful forty-year relationship.

He wants a woman who is nurturing and thoughtful and supportive and patient and fun and playful and sexy.

This doesn’t mean that he is turned off or intimidated by your intelligence or ambition, but it’s merely a bonus. After all, he’s surrounded by smart, driven people all day long. When he gets home, he needs to turn off his business mind.

He doesn’t need to be challenged or criticized. He needs to laugh.
He’s doesn’t care about your doctorate or your triathlon medals. He’s got his own.

And if you perpetually think that the more impressive you are, the more it’s going to allow you to land an impressive man, I would encourage you to reconsider.

Men are looking for someone who makes his life better, simply by being optimistic, silly, sexy, and fun. It’s a completely different energy from your ability to slay dragons in the workplace.

If you’re a woman who doesn’t consider herself an ambitious, intense CEO type, it will be far easier for you to land one of these men, because you offer a complementary feminine energy to his masculine energy.

This can be hard to swallow, I acknowledge. 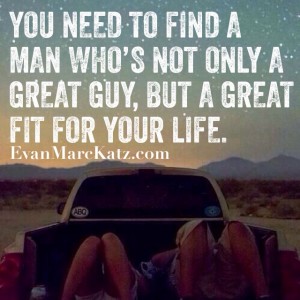 All my success stories changed their choice of men. If you’re out working 60 hours a week, you don’t need a guy who does the same. You might need a guy who is your complement, a supporter, a nurturer, your biggest fan who is your strength when the going gets tough. He makes you laugh. He listens to you. He gets you.

You can protest that you don’t want your complement; you still want your clone.

Fair enough. How’s that working for you?

So, to me, your takeaway in figuring out how to attract and keep the right guy, your biggest problem is not who you are inside.

The men you’re choosing are not necessarily the right guy.

Because when you choose someone with complementary energy, the puzzle pieces just fit and the whole thing becomes easy.

And I assure you, there’s absolutely no need for dating coaching when you’re in an easy relationship with a guy who is a great fit for your life.