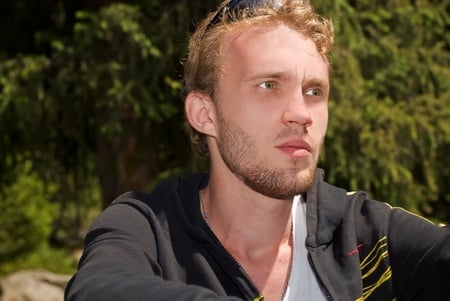 I’ve read through your posts on changing men, or not changing men, depending on the situation. In one response, you mentioned that one of your ex-girlfriends had not communicated a concern she had with you about being moody, anxious, etc., because she didn’t want to make a mistake by being overly critical, but you felt that it was a valid concern.

I have a moody boyfriend, and it seems that just about anything negative that happens in his life can get him in a bad mood. He doesn’t get mean, or anything scary. He just backs away, and stays there, sometimes for days.   Sometimes I just ignore it, go about my business, and wait for him to re-emerge. But other times, it affects me negatively, like when we have plans and he now “doesn’t feel up to it”.

We’ve talked about it, many, many times and he thinks it’s out of his control. I disagree. Since you mentioned being moody, I was wondering – is that a thing of the past? Are you still moody, and if so, how does your wife deal with it? Or did you do something about it because it affected your relationships?

If there’s one thing I’ve concluded after marrying a happy person, it’s that everyone should marry a happy person. And no, I’m not entirely kidding.

Needless to say, given the amount of misery in the world, choosing from only happy people would leave a much shallower dating pool, and yet, I still think it’s worth the risk. And while I tend not to believe in black and white thinking, I don’t believe that someone who is fundamentally unhappy can be a great partner.

Before I go any further, allow me to acknowledge a few things: unhappy and moody are not exactly the same. “Moody” sounds temporary, where “unhappy” is chronic. Then again, if your boyfriend consistently finds himself in a bad mood, I’m not sure how different it is from being unhappy. If it sounds like I’m familiar with the condition, it’s because, from 20-30 years old, I was always somewhere between unhappy/moody/anxious. I dated a LOT in that time and while there were many stretches where I could get by on charm, I could never mask my perpetual dissatisfaction with my career. Women would take a chance on me, but either I was a total downer or I was so unhappy that I’d choose an unsuitable woman just because she was there. Both are recipes for failed relationships.

I don’t want to sound like I have no sympathy for your boyfriend. Life can be tough, especially in light of thwarted dreams, unrealistic expectations, financial instability, flimsy support networks, and run-of-the-mill insecurities. But not everyone deals with things in the same way; and, whether we like it or not, this stuff matters. There are some people who will give up online dating if one email is not returned or give up on relationships just because the last one went bad. Even if this is somewhat “normal,” it’s certainly not a healthy trait. Not for the anxious/moody person, and not for the poor soul who has to be the strong, patient partner. When your boyfriend is unhappy, it’s only normal to want to pull him out of it, to want to flip a switch in the back of his head to get him from pessimist to optimist. Furthermore, when he’s at his worst internally, that’s also when he’s a terrible boyfriend. He obsesses, stays at home, stews in his own juices, and builds up stories about what’s wrong in the world that may not accord with reality. Not only that, but such a boyfriend has nothing to give to the relationship because he’s always dealing with his own mercurial moods.

I think your question, Katie, is good snapshot of most questions I get on this blog: some form of “I’m dissatisfied with my boyfriend. Should I stay or should I go?” The thing is that he may have the biggest heart in the world, but if he’s perpetually unemployed, a serial cheater, a drug addict, a commitmentphobe, or a terrible communicator, it really doesn’t matter how much you love him. I would say the same thing about a guy who is depressed. It’s not that he’s not worthy of love, but at a certain point, you have to ask if this is the life you want to lead: waiting for days for him to emerge from his self-imposed cocoon while you try to act like everything’s normal. I think there are enough quality people out there who are NOT this way that you don’t have to accept that from a relationship. I’ve written this before and gotten a little bit of blowback on it.

It’s not that he’s not worthy of love, but at a certain point, you have to ask if this is the life you want to lead.

But if we all get out of our own egos for a little bit and stop defending our worldviews, I ask you: if you had a choice between a partner who was anxious/moody/depressed and one who wasn’t, why would you choose anxious/moody/depressed? When I was feeling that way, believe me, I felt chagrined when women would pull away from me. But now that I’m on the other side, I can completely understand why they did.

Oh, and to answer your last question, Katie, my moodiness pretty much disappeared when I found this career and got married. I realized that happy/optimistic is a much healthier way to live and I have an amazing example to follow in my wife.