Paul is 41-years-old, never married, but it’s not obvious why. He’s cute and boyish. He’s charming and successful. He’s fun to be around and is well-liked by strangers. Most importantly, Paul knows how to treat a woman — he’s interested, he listens, and he’s infinitely patient. Paul undoubtedly has good husband potential.

Unfortunately, Paul’s radar for picking women is a little off. He’s constantly drawn to the holy trinity of youth, beauty and intelligence.

As a result, he tends to date 29-year-old women who are way into their careers, their friends, and themselves. His latest girlfriend is named Kim. Paul fell for Kim because she’s so attractive and impressive, but Kim isn’t fully reciprocating.

Paul’s radar for picking women is a little off. He’s constantly drawn to the holy trinity of youth, beauty and intelligence.

They fight too often. The silences are sometimes unbearable. The entire time they’re together, Paul walks on eggshells, hoping that Kim doesn’t break up with him.

Until, predictably, she does.

Paul couldn’t have been a better boyfriend. He was always generous with money, he always understood when Kim needed alone time or needed to cancel a date because of work. And now she’s gone, and Paul is not just sad, but PISSED.

He did everything in his power to treat Kim right and THIS is the thanks he gets?

In that moment, Paul concludes that he’s done with this crap. The next time he meets a woman, he’s not going to do ANY of that.

No more calling consistently.
No more paying for every dinner.
No more putting up with the demands of her career.

From now on, he’s not giving anything to a woman until she proves she’s worthy.

Believe me, Paul doesn’t want it to be this way, he just has no choice.

He can’t expend any more energy on unappreciative women for one second longer.

He’s done being a chump.

Now remember, Paul’s a good guy. A great boyfriend. He’s just been burned one too many times by a selfish woman. So he withdraws. Says he’s done with dating. And if he does date, she’s going to have to work very hard to prove she’s worthy, because he’s not going to give the way he did in the past with Kim.

Imagine you’re the next woman who meets Paul. He’s attractive and intelligent, all right, but he’s bruised. He wears it like a badge. He makes it really clear — whether he wants to or not — that he’s not going to be taken advantage of by a woman ever again.

How does this make you feel about Paul?

Certainly Paul is entitled to his pain and frustration, but YOU’RE not the one who caused it. And now you have to pay the price because KIM was selfish to him?

Chances are, you’re not sticking around to wait for Paul to work out his pain. You’re going to find a guy who is like the OLD Paul — the one who gives, and listens, and follows through and acts with integrity.

The new damaged Paul is going to have to find a woman who is a bigger glutton for punishment than you are. Sadly, he’s probably going to have to wait awhile because most women don’t want men who are testing them, who refuse to give, who are inherently mistrustful of women.

So, do you have anything in common with Paul?

Have you been the “giver” in relationships and concluded that you’re never going to be that way again?

Has that been a successful plan?

Are men flocking to the defensive, mistrustful, protective, selfish version of you?

It’s not HIS fault he’s taking advantage of you. It’s YOUR fault for choosing him and staying with him.

The problem is, you’re putting up with the WRONG misbehavior.

The reason I’m writing this blog post at all is because I was thinking about my wife the other day and how amazing she is to me.

How she makes me watermelon and apple juice each morning with our fancy new juicer.

How she encourages me to go out drinking with friends on a Tuesday night when she’s still got work to do.

How she laughs that I’m always surrounded by three women at every single party we attend together.

And because she’s this way, it makes me appreciative. So in return I’ll take her job of making the bed, even though we’ve got way too many pillows for my liking.

Or I’ll scour LA Weekly for food and wine festivals that she enjoys so much.

Or I’ll listen to her vent about her boss — even though it’s pretty much the same exact conversation we’ve had for three years straight.

To be clear: my WIFE sets the tone with her generosity and emotional understanding. And I do everything in my power to give back in return.

That’s what makes us work.

So, if you’re reading this and thinking that you’re just like my wife — never complaining, never criticizing, always giving — and you’re STILL taken advantage of by the men you date, that just means that you need to CUT OFF THOSE MEN quicker. 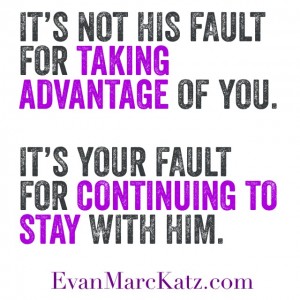 It’s not HIS fault he’s taking advantage of you.

It’s YOUR fault for choosing him and staying with him, the same as it’s Paul’s fault for perpetually choosing selfish women over givers.

Thus, the complaint that you’re a giver who attracts takers is a false one. If you dump all the men who are takers, guess what? They can’t take anymore!

It’s undeniable: the way to bring the best out of your boyfriend is to be a giver.

You can literally change the way he acts towards you just by being happier, more playful, more generous and less judgmental towards him.

The RIGHT guy will appreciate this and treat you better in return.

The guy who doesn’t appreciate this should be summarily dismissed.

If you have a boyfriend, try this, and let me how it goes.

Do you think your relationships are better when you hold back or when you give? Your comments are appreciated.