Home > Blog > Cheating > My Girlfriend Broke Up With Me. I Slept With Someone Else. Have I Done Something Wrong? 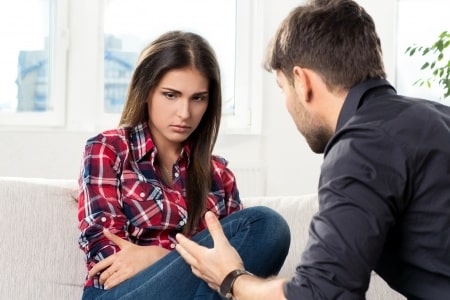 I dated my ex for 16 months. We broke up with no hints of getting back together. 2 weeks later I had a one night stand with someone I don’t know. 1 week later, my ex calls and indicates we should try to get back together. In subsequent discussions, she asks me if I had slept with anyone. Being an honest man, I reluctantly told her yes. She is furious and hurt and is accusing me of cheating and lying to her. I want to be with her, never wanted to be without her (she pushed the breakup), and am disappointed that I hurt her, BUT, do not feel like I cheated or lied. Where do I go from here? Lay low and see if time helps or go all in again and try to win her over again?

You did nothing wrong.

You were broken up.

You had no hints of getting back together.

You did what pretty much any guy would do after a sixteen month relationship.

That doesn’t mean you’re out of the woods yet, but it does mean you’re technically “right”. The problem is that having truth and logic on your side matters very little when discussing emotional issues. This, by the way, is the main reason that I blog. I try to inject a little male logic into the largely feminine realm of relationship discussions. (This does NOT mean women are illogical — I’m just making a generalization here). I don’t actively hope to change the world, but I do hope to observe the world AS IT IS, as opposed to how it SHOULD be.

She probably wanted you cry your eyes out for a few weeks, paralyzed, unable to imagine yourself in the presence of any other woman.

Your girlfriend is caught up in how it SHOULD be. After a long, serious relationship — one in which she still had feelings for you – she was clearly hoping for some dating moratorium. She probably wanted you cry your eyes out for a few weeks, paralyzed, unable to imagine yourself in the presence of any other woman. And then, when she came back to reconcile with her beloved, she was shocked to discover that you had drowned your sorrows in the cleavage of another woman during – GASP! — a meaningless one-night stand. The gall! The disrespect! Did your relationship just mean NOTHING?

It feels pretty ridiculous to type those last few lines because they make no logical sense. You were broken up. You did when men do when they’re single — look for other women. When my serious girlfriend dumped me in 2004, I left her house, red-eyed, drove ten minutes home, and reactivated my JDate account instantly. Would I want to be the first woman to date me after my heart had been shattered? Hell, no. But I certainly wasn’t going to repair my wounds by sitting at home by myself for a month….

This isn’t to say that I don’t have sympathy for your ex-girlfriend. It’s just that it’s HER job to get over this bump in the road. There’s nothing you could do at this point that’s going to fix things. Especially since she asked for your honesty and you gave it to her.

This brings up a rant that I’ve always wanted to have in public forum. It stems from a conversation with a girlfriend from 4-5 years back — a girlfriend that I loved, a girlfriend who was deeply distrustful of men. It was based on her personal experience — she’d been cheated upon, and even dated a polyamorist at a time. As a result, I remember her telling me, point-blank, early in the relationship (and repeatedly thereafter):

“If you ever cheat on me, you’d better tell me. I do not tolerate cheaters and I will break up with you.”

And, me, ever the wise-ass, replied, with a twinkle in my eye, “Well, if you’d break up with me, why would I tell you that I cheated?”

And she’d reply: “Because it’s the right thing to do. It’s the manly thing to do. You’d want to have integrity, right?”

And I’d reply: “Yeah, but what if I made a god-awful mistake — say, drunkenly kissing a stranger at a party in Vegas? What if I made a mistake that I instantly regretted and would never repeat? What if I knew I would never intentionally jeopardize my relationship for any other woman again? What possible incentive would I have to confess, presuming that you’re instantly going to dump me for ‘honorably’ telling you? It just doesn’t make any sense.”

I’m not defending cheating. I am saying that I was living in the real world, and she was living in the fantasy world. In the real world, when someone cheats and realizes the consequences are dire, he’s got no incentive to confess. I can spit gum on the street in Singapore and turn myself in so I can get caned, or I can deny, deny, deny. I can “borrow” lines from a book when writing a term paper, and then tell the professor that I plagiarized, but that wouldn’t be too wise.

You want a guy to tell you the truth about cheating? You better be prepared to forgive him and painfully accept his apology. Otherwise, you’re asking for him to lie to you.

So while I’m not encouraging cheaters, let’s understand what logical behavior follows after infidelity: lies to cover up. You want a guy to tell you the truth about cheating? You better be prepared to forgive him and painfully accept his apology. Otherwise, you’re asking for him to lie to you.

To wrap up, I want to offer a quote from Ramana Hamarshi, “Wanting to reform the world without discovering one’s true self is like trying to cover the world with leather to avoid the pain of walking on stones and thorns. It is much simpler to wear shoes.”

If you’re frustrated with the dialogue here and expect to change men or women, make no mistake about it, you’re trying to cover the world with leather.