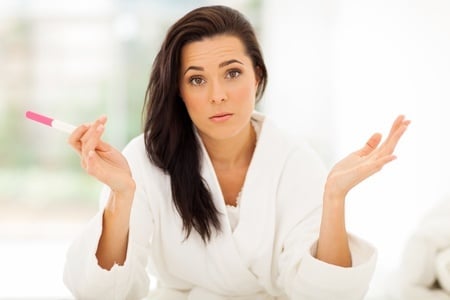 Longtime friend and EMK blog reader, Amy Klein, has carved out a place for herself on the internet as a fertility expert, due to her frustrations with conceiving and carrying her own child. She has written extensively for the New York Times Motherlode blog about her travails, and has recently contributed this extraordinarily important piece to Aeon Magazine.

The premise? “Women in their 30s and 40s exhibit a mix of wishful thinking and woeful ignorance when it comes to their fertility. Why?”

Great question. And Amy is far better equipped to answer it than I am. By way of personal anecdote, I remember being in Toronto, where I was auditioning for a TV show where I’d be coaching women, and meeting a 43-year-old woman who was a personal trainer. Very cute, very fit, very ignorant when it came to biology. She claimed to want to have her own children, but didn’t see the need to rush things because she was “in great shape”. I paused, incredulous, looking for a sign she was kidding.

“You know that just because you’re in great shape doesn’t mean your ovaries are, as well?”

Which brings us to Amy’s article, in which she validates my experience with a study:

“A 2011 study in Fertility and Sterility surveyed 3,345 childless women in Canada between the ages of 20 and 50; despite the fact that the women initially assessed their own fertility knowledge as high, the researchers found only half of them answered six of the 16 questions correctly. 72.9  per cent of women thought that: ‘For women over 30, overall health and fitness level is a better indicator of fertility than age.’ (False.)”

If you want to have your own biological children,  you are better off taking your love life seriously in your early thirties, instead of putting off dating until your late 30’s.

Maybe I know more because I married a 39-year-old woman who suffered from two miscarriages, two chemical pregnancies, a fibroid surgery and two consultations at fertility clinics before bearing two healthy children at age 41 and 43. But we’re the anomaly – even though we didn’t go the in-vitro-fertilization route. Cites Klein:

All is not lost, of course. I’ve written previously about this heartening study, that illustrates that a woman in her late 30’s has nearly the same chance of getting pregnant as a woman ten years younger – over the course of a calendar year:

“With sex at least twice a week, the study found, 82  per cent of 35-to-39-year-old women conceived within a year, compared with 86  per cent of 27-to-34-year-olds. ‘In our data, we’re not seeing huge drops until age 40,’   said Anne Steiner, an associate professor at the University of North Carolina School of Medicine.”

But there is a serious drop off at age 40, one that should not be ignored. I’ve talked to lots of women who are convinced that egg-freezing is going to save their dreams, but they’ve largely been sold a bill of goods by the doctors. Yes, it’s better than nothing, but, according to Klein’s piece: “At 35, you have 20”‘30  per cent chance of your frozen eggs creating a baby in the future, using IVF. At 42, it is 3.9  per cent.”

I’m not one of those guys who thinks that you should go to college to look for your husband. Statistics suggest that these marriages are fragile due to the inexperience and immaturity of both members. However, if you want to have your own biological children, as pointed out by Lori Gottlieb in “Marry Him” and so many others, you are better off taking your love life seriously in your early thirties, instead of putting off dating until your late 30’s. Not only have a lot of good men been snatched up by then, but a good percentage of the remaining ones who want to be fathers will be aware of these statistics and pass up women their own age.

This isn’t a scare tactic. This is biology. This is reality. Let’s all pay attention instead of trying to pretend that the inconvenient truth isn’t actually true.

This website uses cookies to improve your experience while you navigate through the website. Out of these, the cookies that are categorized as necessary are stored on your browser as they are essential for the working of basic functionalities of the website. We also use third-party cookies that help us analyze and understand how you use this website. These cookies will be stored in your browser only with your consent. You also have the option to opt-out of these cookies. But opting out of some of these cookies may affect your browsing experience.
Necessary Always Enabled
Necessary cookies are absolutely essential for the website to function properly. These cookies ensure basic functionalities and security features of the website, anonymously.
Functional
Functional cookies help to perform certain functionalities like sharing the content of the website on social media platforms, collect feedbacks, and other third-party features.
Performance
Performance cookies are used to understand and analyze the key performance indexes of the website which helps in delivering a better user experience for the visitors.
Analytics
Analytical cookies are used to understand how visitors interact with the website. These cookies help provide information on metrics the number of visitors, bounce rate, traffic source, etc.
Advertisement
Advertisement cookies are used to provide visitors with relevant ads and marketing campaigns. These cookies track visitors across websites and collect information to provide customized ads.
Others
Other uncategorized cookies are those that are being analyzed and have not been classified into a category as yet.
SAVE & ACCEPT
233 Shares
Tweet
Share233