Home > Blog > Letting Go > I Moved in With My Boyfriend and Now Everything Is Falling Apart. 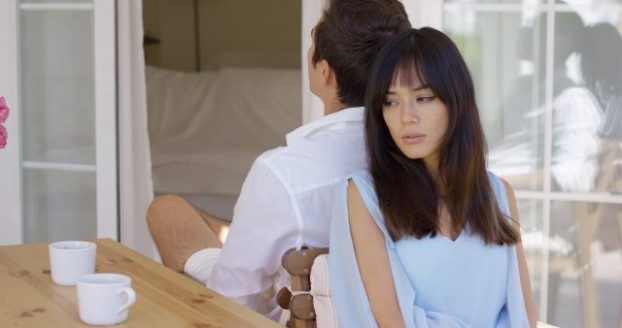 I have been dating a man on and off for 3 years. We have decided to move in together and blend our families. We both have children. The issues I am having is that we argue over the smallest things and they turn into huge items that result in him calling me names and accusing me of infidelity, ignoring me and so forth. When we disagree, I feel like I am defending myself, and thus do have a tendency to talk over him in an effort to prove my innocence. He has indicated he will always one up me whether it is negative or positive. I feel we have more negative interactions than positive ones lately. There has been trust and insecurity issues in our relationship on both our parts and now I feel we have lost all respect for each other. My kids aren’t overly happy for the most part either because they do not feel he treats me well. I love him with all my heart and do not want to be without him, but I don’t feel our communication will change. What should I do?

I’ve written about cohabiting multiple times. My take is that it is a vital step — the single best way to road test a marriage before you get married.

When I write this, there are generally two objections:

What I’m saying is that if you DO want to get married, start by dating ONLY marriage-oriented men.

In other words, you’re lucky, Michelle, that you moved in with this guy — otherwise you’d have no other way to realize he’d be a terrible husband.

Your solution isn’t in improved communication; it’s not your job to change a man who calls you names, accuses you of infidelity, and doesn’t treat you well.

It’s not your job to change a man who calls you names, accuses you of infidelity, and doesn’t treat you well.

Your solution is to leave ASAP and find yourself a man committed to your happiness.

I hope you find the courage to do so, lest you become another statistic about a divorced woman who lived with her boyfriend before getting married and ignored the warning signs.