Choosing a Boyfriend is NOT The Same as Choosing a Husband

After you’ve been burned by men a few dozen times, you start to question your judgment. You don’t want to get hurt. You don’t want to waste your time. You want to figure out what the future holds as soon as possible, so you don’t fall in love with a narcissist or a commitmentphobe. The problem is that you’re so worried about figuring out if a man is going to be your husband that you inadvertently sabotage the entire relationship. Simply put: choosing a husband is not the same as choosing a boyfriend. You’re allowed to make mistakes in choosing a boyfriend; you can’t make those same mistakes when choosing the right partner for marriage.

The first few weeks of dating only reveal so much: whether you’re attracted to each other, whether he makes an effort to contact you between dates, whether your conversation is easy and fun. That’s a great place to start, but it’s exactly why you don’t marry someone you just started dating. You don’t have enough information. Over the next couple of years, you’ll wrestle with factors like compatibility, communication, financial stability, and how you manage conflict in determining whether you’re choosing the right partner for marriage.

So while it’s tempting to look ahead and try to figure out your future with him, it’s impossible to do so. You start by choosing a boyfriend. Later, you determine whether your boyfriend is, in fact, husband material – someone you can trust, someone who can be the foundation of your entire life.

My client, Leslie, asked me recently, “When did you ‘just know’ that it was right with your wife? When were you able to tell for sure that she was ‘the one’?”

After a brief pause, I said, in all seriousness:

“Six months after we were married.”

After all, she comes from a culture that is all about undeniable feelings, Hollywood fantasies, and powerful mythology surrounding the notion of love.

You probably do, too.

Like it or not, dating is ALWAYS an extended audition, with both parties consistently gathering information and assessing their futures, up until they reach the altar.

Right now, I’m going to blow your notion away — not because I feel like killing your dreams, but because your dreams are holding you back from finding true happiness.

Look back on your life.

How many times did you “just know” that a man was “the one?”

How many times did he actually turn out to BE “the one?”

The defense rests, your honor.

So if we can be wildly misguided in our feelings, what do our feelings actually teach us?

Literally every single woman reading this has had a feeling that felt true, but turned out to be false.

Maybe he freaked out after three intense months together.

Maybe he enjoyed your company but never actually saw himself marrying you.

Maybe he turned out to be a liar, drug addict, or serial cheater.

These are things that you couldn’t have known on date one.

The only way you could have learned them was to keep your eyes open and keep open to the possibility that you don’t “just know” anything.

There’s always new information pouring in that should inform your decisions.

And if it comes as a shock when a guy suddenly dumps you, it shouldn’t. Because YOU also reserve the right to change your mind as time goes by.

You don’t fall in love with every guy you meet.

You may determine that he’s financially irresponsible or not a good father figure.

You may determine that the attraction isn’t there and that you need to feel more.

The point is that you can only figure this stuff out over the course of TIME.

Which is why, like it or not, dating is ALWAYS an extended audition, with both parties consistently gathering information and assessing their futures, up until they reach the altar.

This is not a crime. This is not selfish. This is smart. This is practical. This is what prevents us from making huge mistakes and marrying the wrong people.

If a man dumps you after two years, it’s because he felt it would be a mistake to marry you and THEN want to dump you. That’s a GOOD decision.

And vice versa. Whether you break up with a man after a week or a year, you’ve come to the conclusion that he’s not the right guy for you, which frees him up to find the woman of his dreams. Another good decision.

The reason I’m writing this blog post is that every day I talk to private clients who make two colossal mistakes when it comes to assessing men.

I’m guessing you do the same.

1) You fall in love with a guy within a few weeks, then spend 6 months trying to preserve that feeling, EVEN WHEN HE TREATS YOU LIKE CRAP.

This is a classic case of “you just know” being really misleading. All you know is that you’re intoxicated by him — what you seem to ignore is that he’s a terrible partner who doesn’t treat you with kindness or consistency and has absolutely no desire for a future with you.

2) You think that you MUST know in a short period of time whether he’s the one. And if you don’t have that “feeling,” you move on.

Choosing a boyfriend is NOT the same as choosing a husband.

And you need to stop making it feel that way right now.

If you take your profile down to focus on a promising new man — even if you don’t have butterflies — it’s not a mistake.

You’re giving a new relationship a chance to grow and breathe.

If you give it a chance and it doesn’t feel right after a month or two or three, you move on, gracefully.

But if you refuse to give any new relationship a chance unless you have that “you just know” feeling, you will find yourself devastated over and over, because clearly you DON’T just know…

Stop thinking that just because you call a man your boyfriend that he HAS to be your husband.

Plus, you’ll never get to see what it’s like to enjoy the act of discovery that comes with merely committing to try on a new relationship. 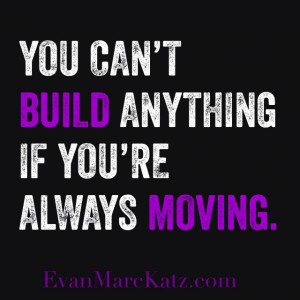 And if you never give a guy a shot unless he takes your breath away, you are destroying your chances for lasting love.

The entire time we were dating I was happy, but I questioned the relationship because it wasn’t what I thought it was supposed to look like.

When I finally proposed, I made an educated guess: I’d learned so much from my dating coaching practice, that I felt I’d be making a huge mistake if I let her go… just to find someone a few years younger with a similar background.

So was I SURE that we were “meant to be” and “soulmates” and all that?

But I was sure about this:

Every relationship where I was sure in the past blew up in my face.

This relationship was, by far, the easiest, healthiest, warmest one I’d ever had.

And if it didn’t meet what I THOUGHT it was supposed to feel like, that just meant that my EXPECTATIONS were WRONG.

Of how it’s “supposed” to feel.

I took a leap of faith based on my knowledge as a dating coach.

But you don’t have to. You can learn from what I’m sharing here.

We own a big house in the San Fernando Valley.

We have a ten-month old daughter who makes us smile every day.

We’re having a New Year’s Eve karaoke party for couples in a few days.

And we both giggle when we think how easy it would have been to pass each other up, merely because we didn’t meet each other’s preconceived image of perfection.

– Stop falling in love with men you barely know. You need YEARS to really assess his worthiness as a life partner.

– Stop giving a free pass to men who give you that FEELING. Chances are, that FEELING allows you to ignore a TON of red flags.

– Stop thinking that just because you call a man your boyfriend that he HAS to be your husband. Dating is a 2-3 year audition — and at any point, either party has the right to break it off if he/she feels that the next 30 years would be a mistake.

– Stop thinking that you have to “just know.” Your gut has led you astray every single time. Maybe this is a good time to use your head a little bit.

Please let me know what you think of this post in the comments section below.

And if I don’t hear from you — if you’re one of the readers who lurks, but never posts – thanks for making this blog into the success it’s been.

Over 1 million people have visited in 2011 to learn more about dating, relationships, and the opposite sex, and I’m honored to be a part of the conversation.

If your relationship is making you feel anxious, you must learn these 8 reasons why.
1K Shares
Tweet
Share1K