Do You Expect Too Much From A Potential Partner?

I’ve written about Eli Finkel before. He’s a researcher at Northwestern and a man after my own heart. He looks for the signal behind the noise – and when it comes to dating and relationship advice, there sure is a lot of noise. His latest study suggests something you could probably have guessed yourself:

“The earth is not going to move every time a couple has sex; not every interaction is going to be a Hallmark moment.”

“Americans today are increasingly – and perhaps unrealistically – asking their marriages to fulfill higher-level psychological needs, such as those related to personal growth and self-realization. So, it’s not so much that we’re asking too much of our spouses, we may just be asking for the wrong things.”

Another of my favorite relationship researchers, Stephanie Coontz, echoed the point, saying, “Higher expectations can lead to greater disappointments, and they require people to keep their relationship fresh in ways that people didn’t used to feel required to do. The earth is not going to move every time a couple has sex; not every interaction is going to be a Hallmark moment.”

You should look for things in your relationship that you can’t get anywhere else.

This is why I’m critical of the “Eat, Pray, Love” model of finding one man who is your divine soulmate, heaven sent to inspire you, be your champion and fulfill your every need. It’s not realistic, when you both have jobs, kids, friends, families and outside interests. 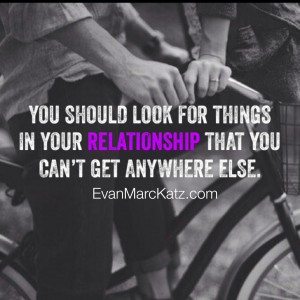 Everything else is a bonus.

If your relationship is making you feel anxious, you must learn these 8 reasons why.
1K Shares
Tweet
Share1K