How Do I Make Sense of All The Different Dating Advice Out There?

Evan, I have been reading a lot of different dating advice websites, especially the ones written for MEN. I have noticed a trend in telling men to get the women to chase THEM. (Ask Men is one example) I see a lot of advice to women about why men disappear, what to do when they disappear, etc., but it seems that men are being COACHED to disappear, as a power play, a way to get the upper hand, and to get the woman to chase THEM. So if women are being coached to play hard to get, and men are playing the same game, what does this mean for male/female relationships?

In this incarnation of my dating life I have decided that I am not going to chase men. (In my younger days I admit that I did, and no good ever came of it.) This time around I absolutely I will not chase men, nor be baited into chasing one. (Yes, men are advised to bait, hook, and then ignore a woman, to get her to do the chasing). BTW, I am not a “rules” girl, I read that book, and feel dumber for having read it. I do want a man to pursue me, but when he does, I will be increasingly receptive to him, and once a relationship has been established, I won’t mind taking the initiative when appropriate. I won’t wait 2 days to return his calls, or only see him 2 times a week, or play all the mysterious stuff that Rules promotes. (They call it mysterious, but I call it secretive & evasive.)

So while I am not a hardcore Rules girl, I am a little old fashioned and want a man to pursue me, not hand me his business card and expect me to call him. Or e-mail me endlessly on Match.com but never ask to meet me face to face. What do you think of the role reversal being promoted by sites such as Ask Men (they call it “The System”) Do you think many men are following that advice ? —S.E.

Hoo boy. I’m not sure where to begin.

I would guess you’d be more interested in how you can understand and land the confident, successful, happily married guy, as opposed to the weak, insecure, jealous, inexperienced guy.

I guess I’ll start with how I give dating advice, and how I think it’s different than many of the other sources out there.

1) I come from a happy and highly functional nuclear family, so I not only had a model of the kind of marriage I wanted, but I strove to emulate it. Many people who give advice come from broken homes, abusive relationships and unfortunate backgrounds, none of which are a crime. But I think my past is a strength, inasmuch as I have a very healthy outlook on marriage.

2) I am — at the risk of immodesty — very confident and flirtatious. Let’s just say I had considerable practice in online dating, dating and relationships. Many people who give dating advice have been married for 30 years and don’t know anything about dating. Many others (think pick-up artists) came to do so because they are shy, awkward and insecure. But unless you want to attract a guy like that, why would you care what such men think?

3) I am married and in an incredible relationship because I followed my own advice. And I would guess you’d be more interested in how you can understand and land the confident, successful, happily married guy, as opposed to the weak, insecure, jealous, inexperienced guy. Then again, I could be wrong. I’m always willing to risk being wrong by having opinions. What kind of coach would I be if I didn’t have opinions?

4) I’m not afraid to stand on principle. Other coaches are marketers — their only desire is to a) pray that you like them and b) convince you to buy their products. My loyalty is not to my own biases or my own bottom line, but to the truth. I don’t view the world based on how I’d LIKE it to be; I pay attention to how it IS and advise on how you can best react to reality.

And very often, reality isn’t pretty. Would I rather tell you the truth or validate your worldview so that you don’t shoot the messenger?

The answer should be obvious.

Real men don’t play games, use power plays, or try to get the woman to chase them.

People come here because they expect to be told the truth, rather than some rah-rah “all women are goddesses” bullshit that I don’t believe and I don’t expect you to believe.

Unless you believe the equivalent bullshit that “all men are noble studs”.

Which, of course, they’re not.

Now that I’m done tooting my own horn, let’s refocus on the advice you’ve chosen to cite, from AskMen.com

I just went to Alexa to check out the site’s demographics. What did I discover?

The target audience for AskMen is men 18-24, men without children, and men who live at home or are in school. When I clicked to see their income, most of these men didn’t even HAVE income. Compare that to Esquire readers, the majority of whom make six figures. Which kind of man are you looking for, S.E.?

Basically, I’m asking you what difference it makes if a website for boys is giving those boys advice that will work on insecure teenaged girls with low self-esteem? 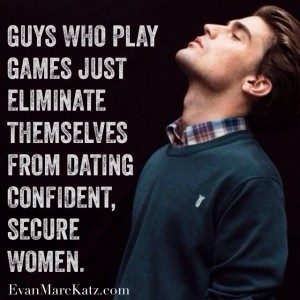 Just as real men don’t play games, use power plays, or try to get the woman to chase them. This is run-of-the-mill pick-up artist advice for awkward teens, not advice that 40-year-old men and women are expected to utilize.

From this paragraph, it sounds to me like you know what you’re doing:

I do want a man to pursue me, but when he does, I will be increasingly receptive to him, and once a relationship has been established, I won’t mind taking the initiative when appropriate. I won’t wait 2 days to return his calls, or only see him 2 times a week, or play all the mysterious stuff that Rules promotes.

And if you know what you’re doing, it doesn’t impact you one iota if some guy is running a game on you. Guys who play games just eliminate themselves from dating confident, secure women. Right, S.E.?

Discover why quality men choose some women and not others so you can finally meet your Mr. Right.
21 Shares
Tweet
Share21