Can Weight Loss Ruin Your Relationship? 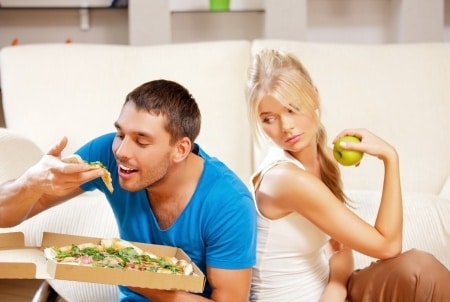 21 couples participated in research where one partner lost 30lbs or more and how it impacted their relationship. While many were happy and felt closer emotionally and sexually, in other couples, the weight loss caused complications and triggered fundamental insecurities.

“The thinner partners began nagging their significant others to hit the gym. People whose weight hadn’t budged became critical, disinterested in sex, and even tried to tempt their partners with fatty foods in order to derail their progress. The difference between happy and not-so-happy couples boiled down to the amount of support in the relationship. When both partners were on board with a weight-loss plan, they felt closer. But if one person resisted, their bond suffered.”

This is basic human psychology, but it doesn’t make it any less confusing or painful. The thin partner becomes evangelical about weight-loss and wants to spread that joy to everyone around her. The partner who is content being heavy feels left behind and resentful, as if being fat isn’t “good enough”.

She dumped me three times based on her belief that a guy like me would never be faithful to a woman like her.

“Weight loss causes relationship stress because it triggers people’s fundamental insecurities,” Bethany Marshall, PhD, a Los Angeles-based psychotherapist, tells Yahoo Shine. Some people interpret their partner’s healthy lifestyle as a sign he or she is focused on their own life, which can feel exclusive. It’s also possible that one person appreciates the other’s new, leaner body, but not the attention it brings from the opposite sex, says Marshall.”

Weight loss is a very personal issue for me, since I’ve had at least two girlfriends who lost over 50lbs prior to dating me. One of them, in particular, remained insecure about her body long after she’d gotten thin. She’d get upset when men looked at her in the gym (because they never would have done that before). She’d freak out if I looked at a model on the cover of a magazine (because how could I be attracted to my girlfriend if I also found models appealing?). While my girlfriend had dropped the weight, she still saw herself as the heavy girl with the chip on her shoulder. I felt sympathetic to her but was never able to make her feel secure in her own skin. She dumped me three times based on her belief that a guy like me would never be faithful to a woman like her. She was wrong, but I hope she’s happy, and doesn’t carry around her psychological baggage the way she used to.

If you have lost weight or dated someone who’s lost weight, please, share your experiences below.