Why Do Guys Send Text Messages To Keep In Touch While Dating? 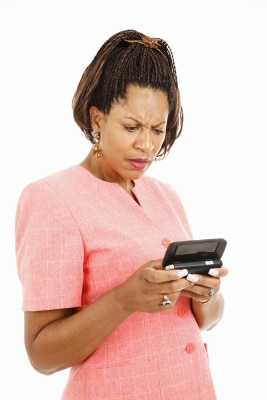 Over the last several months, I have dated 3 men (not simultaneously) that I met on Match.com. They all seem to have one thing in common: after 2-4 dates, they like to touch base with me during the week by sending me text messages to my cell phone! Although I appreciate them thinking about me in the middle of the day, if we have gone out on several dates, at what point is it appropriate to expect a 5 minute phone call a few times a week? Is it too early in the dating process for phone contact? How are you supposed to progress the relationship if you never “touch-base” by actually speaking to one another? Is this typical of people you meet on line? Or, am I just old fashioned (39) and not used to this new aspect of dating?

Guys across America are saying, “Hey, babe. You’re not important enough to get five minutes of phone time. Please accept this weak form of communication and allow me to keep on sleeping with you.”

You struck a chord with this email.

I HATE text messaging. I think it should be used exclusively for only a handful of things:

Letting someone know that you’re lost or running late.

Telling someone where you’re located in a crowded theater or bar.

Writing flirty or dirty notes to be provocative and naughty.

Everything else should be banned. I mean, email is bad enough. And I say this as a guy who lives by email. But anyone who’s ever used it knows how conversations can easily take a wrong turn. There’s no context, tone, voice, or facial expressions to modify your message. The next thing you know, you’re having a vicious argument that could have been easily avoided in person. Plus you have a transcript to commemorate it!

Texting is ten times worse. You’re encouraged to misspell, you’re discouraged from saying anything deep or meaningful. Essentially, texting is emailing for the lazy, illiterate and mobile. You send a text when you don’t want to talk to someone, but you want to let them know you’re thinking of them. And what can be more flattering than conveying, electronically, the idea that you DON’T want to talk to the woman you’re courting? Essentially, guys across America are saying, “Hey, babe. You’re not important enough to get five minutes of phone time. Please accept this weak form of communication and allow me to keep on sleeping with you.”

And as long as you let them do it, they will continue to do it. Because texting is only enabled by the person who writes back to the text. If you don’t respond to texts, guess what? You’re letting him know that it’s a poor way to reach you.

If you don’t respond to texts, guess what? You’re letting him know that it’s a poor way to reach you.

Understand this about men: they will usually do the least that they can to maintain their relationship. So if he can text you at 11pm on Friday night after a week of silence and charm you with something like: “UR 2 hott! Cum over now?”, well, you get what you deserve. But here’s the real problem: there are women everywhere who are complete suckers for this crap. Maybe it’s a low self esteem thing, but as long as some desperate girl lets him get away with it, he’ll always have a low-maintenance sexual outlet. Therefore, he’ll never feel the need to do all the heavy lifting of relationships such as “calling” and “dates”….

But the truth is, Rikki, you don’t need men who won’t call you. It’s a self-selecting process. If he’s a good man who is genuinely interested in you, he will make the kind of effort that reveals this. If five minutes on the phone is too much work for him, it speaks for itself.

As to how you redirect a lazy man to give you more effort, the trick is to do it with wit and charm. Nothing will turn off a guy faster than: “I HATE TEXTING. IF YOU THINK THAT LITTLE OF ME, GO TAKE A HIKE, DOUCHEBAG!” Try to redirect his energy in a positive way that encourages him to keep working for you.

As long as he’s working for you, you’re still in control. So maybe the next time he texts, let him know that you turn off your cellphone at work, and he can best reach you on your regular phone. Or maybe you tell him in a flirty way that the way to your heart is through your voice — and that, if he’s lucky, he might be able to catch you on your cell at 7:30 before you go out tonight. What you don’t want to do is sound like a stick-in-the-mud, my-way-or-the-highway woman. But you can refuse to play his game and still make him feel attractive, which will keep him chasing you through whatever medium you choose. Good luck.