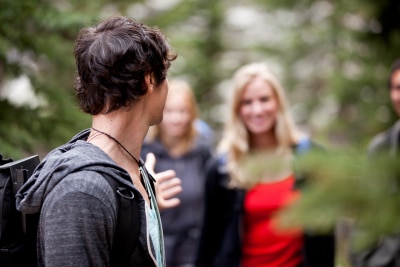 I received this email the other day from a woman who read Why He Disappeared.

I found it frustrating — but really, I was feeling frustration on HER behalf. This woman is tearing her hair out because she doesn’t know how to apply my advice. And her frustration is what spurred me to write today’s post.

I think your advice is contradictory. You imply that you should get rid of the guys that don’t call regularly and make it obvious that they want to date and pursue a relationship and yet in the book you mention that you didn’t take your wife on a proper date for the first 4 weeks and how great she was that when you did call she was nice and said yes to whatever you proposed doing…and you ended up married….which is why women put up with flaky guys and “bad behavior”, holding out hope that it will change and turn into something serious. Like your relationship.

So which is it? Are you always nice when they call and say “yes” to the date? Or do you move on to the next guy because this one isn’t making much of an effort? For some people the 4 weeks turns into 4 months without them noticing and by then they’re in that pattern…and the behavior becomes acceptable yet unfulfilling and it’s too late to change it because you’ve been the “nice”, undemanding girl the whole time.

My first inclination was to defend myself.

After all, I understand what I’m talking about!

But if Tanya is finding this grey area to be a bit too grey, then I have to acknowledge that perhaps I can do a better job of explaining it.

So let’s take a real-life example, shall we?

You don’t win this war by waiting him out and hoping he falls for you after four months or six months or one year of casual sex.

Janie is a client who signed up for Love U.

I like Janie a lot. She’s the type of client I’d be friends with in real life. Positive attitude. Good sense of humor. Understands men and lets them be themselves.

Which is why I wasn’t at all surprised when she met a man only two weeks into our coaching sessions.

What DID surprise me is that, after the initial chemistry rush, Janie settled into a low-intensity pseudo-relationship that didn’t leave her at all satisfied.

Like Tanya — and my wife – she was trying to be the cool girl, but she took it too far.

She needed me to set her straight and show her what her guy was actually thinking.

So why does a man only call or text you once a week to make plans?

Why is a man perfectly content only seeing you once every two weeks?

Why is a man not clamoring to reserve his weekends for you, or take you on a short vacation, or meet your friends and family?

The answer is simple:

He doesn’t want to!

If a man texts you once a week…

If he doesn’t make time to see you regularly…

That’s EXACTLY the relationship that HE wants!

He wins. You lose.

You don’t win this war by waiting him out and hoping he falls for you after four months or six months or one year of casual sex.

You win this one by assessing his efforts and concluding that you’re wasting your time.

There’s a huge difference between giving a guy six weeks to choose you over the other women he’s dating… and to be a sucker for hanging around when you’re merely (and clearly) his “once a week” girl.

Application of this made-up “rule” is surprisingly simple.

When you start dating, Don’t Do Anything. He calls, he texts, he emails – you just “mirror” his efforts and give him enthusiasm and warmth every time.

If he doesn’t follow through fast enough or often enough, make a mental note: “Hmm… this probably means that he’s a) dating other people and isn’t sure whether I’m “the one” OR b) he’s just not that into me and using me for now.”

This doesn’t mean he’s a bad guy. This means he’s a regular guy.

This is how we work.

I may have casually seen my wife for the first 4 weeks of our relationship, but I would always email the next day to say I had fun. I was the one who was making the effort to see her more. She didn’t have to do anything except say yes and not judge me while I worked it all out in my head.

There’s a huge difference between giving a guy six weeks to choose you over the other women he’s dating… and to be a sucker for hanging around when you’re merely (and clearly) his “once a week” girl.

So don’t worry about how much you like him, how strong your feelings are, or anything like that.

Just evaluate your man on the effort he’s making for you.

You’ve had boyfriends before, right?

How did they act? Did they “see you” once a week for six months and suddenly declare their love?

So give a guy 6-8 weeks to figure out his feelings, if necessary. And if you don’t get the sense that the relationship is growing, the talk is brief and emotionless:

“Hey Adam, it’s been fun getting to know you, but I get the sense that we’re not on the same page. I need a man who is looking for a relationship and you don’t seem to be that guy. No hard feelings, but I’m going to go find that guy. Best of luck in your search. Take care of yourself.”

If he values you, he’ll fight for you.

When the relationship is growing — like it was for me in 2007 — you may just have a moment like this:

One night, when we were eating Chinese food and watching TV, I turned to my future-bride-to-be and said, “I think you’re my girlfriend.”

It was that simple.

I wanted to lock her in. I let her know.

The right guy always does.