Why Breaking Up Isn’t Always Personal, and How You Can Make Him Want to Stay 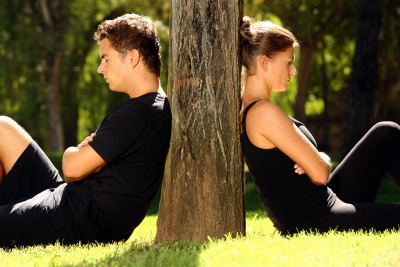 I’ve been following your blog and reading “Why He Disappeared“ — but I’m still a bit confused. I understand what you say about letting go of controlling what a man does, however I don’t agree when you say it has nothing to do with you. It has EVERYTHING to do with you! It’s a personal rejection.

But also you discuss in the book that maybe you did do something on the date that made him not want to see you again? So how does that have nothing to do with you? Can you provide any clarification?

Thanks! I do enjoy your work,  TK

If you’ve read “Why He Disappeared,” you’re well-aware that I think my wife is a relationship genius. I’d go so far to say that I think just about ANY man could be married to her and be happy; that’s how good a person she is.

I’ve also gone on the record to state that she’s nothing like the woman I expected to marry: she’s older, Catholic, more conservative, less book-smart (not a LOT older, not VERY Catholic, not VERY conservative, and certainly not stupid as some readers like to suggest I’m saying.) But it’s no secret that I spent 35 years looking for a female clone of myself…and consistently failed at the task.

So the entire time I’m dating my wife, I’m mentally dissecting her. This is what we do when we don’t have that “you just know” feeling. We dissect. We find fault.

Trouble existed purely in my head because my girlfriend didn’t live up to this fantasy avatar I created for my future wife.

Maybe I could find someone 5 years younger and have more time before having kids….

Now, it’s important to emphasize that our relationship was perfect. Any troubles were ones that existed purely in my head because my girlfriend didn’t live up to this fantasy avatar I created for my future wife.

As I contemplated proposing, I thought about what was most important in life — the things I’m always telling my readers: friendship, laughter, values, loyalty, honesty, kindness, generosity, the ability to be loved unconditionally.

When I looked at it this way, it was a no-brainer.

Of COURSE, I’d propose to my girlfriend. She’s the best person in the entire world. She’d push me around in a wheelchair if I got hit by a bus. What else could matter more than that?

Not whether she’s read the new Jonathan Franzen book…

Not whether she thinks that Obamacare is good or bad…

These are the things that most singles think actually matter, when, in fact, they have very little to do with how you get along on a day-to-day basis.

Dating is a constant process of evaluation. You don’t become exclusive with someone in month 1 because you KNOW you’re going to be together forever. At any point, you can rule someone out for any reason. Whether it’s reasonable or not is another story.

When you’re not smitten and blinded by chemistry, you’re going to objectively evaluate your partner. Worse, you’ll probably dissect him/her. We all do it. “Can I do better? Is this what I really want? Will I be content with this person twenty years down the road?”

After 300 first dates, 5 years of being a dating coach, and a lot of looking in the mirror, I decided that instead of chasing women who were — on paper — more like me, I would be an idiot to give up the amazing relationship I had with my girlfriend. No one had ever made me happier, and if it wasn’t exactly in the packaging I’d imagined, that was okay. I most definitely didn’t fit her image of the ideal man either. Acknowledging this doesn’t bruise our egos. It reinforces our connection. We chose each other over all others. We recognize this every single day.

But if I blew it because of my big ego… if I decided to try to find someone like my wife, except 5 years younger… would that mean that she should take it personally? Or that my wife should rule out all younger men? All Jewish guys? All liberals? Of course not.

As a woman, it’s not your job to try to force him to figure it out. Just make the PRESENT as good as it can be.

Literally, the ONLY way my wife and I could have gotten married is the way we did. She trusted me. Trusted that I was serious about love. Trusted that I wanted a family and didn’t want to waste her time. Trusted that even though I wasn’t “sure” from the beginning, I had my heart in the right place. If she had tried to push me for clarity, or try to change me into her ideal mate, or complain that I should “just know” because she “just knew”… we wouldn’t be happily married right now.

This is why I wrote “Why He Disappeared.” Because there are millions of decent, relationship-oriented men who just don’t know what the future holds.

As a woman, it’s not your job to try to force him to figure it out. If you want a man to love you in the future, all you can do is make the PRESENT as good as it can be.

So if you learn from “Why He Disappeared” how to understand men and be a great date and girlfriend, you’re controlling the only thing you can control: yourself.

You’re letting go of the thing that you can’t control: him.

More importantly, by relaxing and trusting that the right man will WANT to choose you as his wife, you’re creating the ideal atmosphere to find a true, mature love, an atmosphere free of fear and jealousy.

Let me know how it goes for you.