Home > Blog > Flirting > I Think My Doctor Has a Crush on Me, But I Don’t Want to Look Foolish By Asking 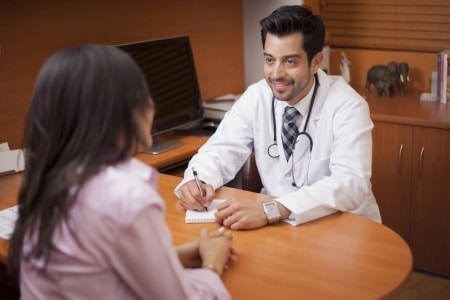 I met this wonderful man at physical therapy, whom I noticed from the beginning was attracted to me. The problem is he is my physical therapist. Soon, he started flirting with me, and I followed the lead. Although he has not been direct, the way he looks at me suggests he is interested. During one of my therapy sections, when I asked him if he wanted to go to lunch with me, he replied, “I wish I could go” and then became very serious. I felt so stupid afterwards. However, several times since then, he suggested that I should head to the lake after my appointment. I know he goes to the lake regularly.

Is he suggesting I go there to meet him? Should I ask him directly if he is interested? I don’t want to look desperate but I think he is worth the risk.

Worth the risk? What risk?

That’s the lesson of today’s blog.

“The only risk is the one not taken”.

Do you realize that men take that risk every single day? That it is expected that they are the aggressors? That it’s their societally ingrained job to introduce themselves to women and set themselves up for rejection?

I’m not even saying that I have a problem with it. I just think that risk and rejection is something that many women could stand to experience themselves. Something about walking a mile in another man’s shoes comes to mind.

Why struggle to figure out “what he’s thinking” when you could just, I don’t know — ASK HIM!

From the hints that the doctor dropped, it sounds like he is interested in you, but doesn’t want to conduct personal matters on business grounds. That line about going to the lake sounds a little more creepy than enticing, but hey, if that’s how he rolls, it’s up to you.

But it would seem like the most authentic thing to do — and this applies to ANYONE in this situation — is to have an authentic conversation. Women love the concept of this, yet struggle with the execution.

Why struggle to figure out “what he’s thinking” when you could just, I don’t know — ASK HIM!

Let’s play the worst case scenario back to you:

“So, Dr. Feelgood…would you like to have a drink after work one day?”

“A drink? But why? I don’t need more than five minutes to help you rehab your arm.”

“Oh, I just thought that you–“

“No. I can’t fraternize with my patients, although it is flattering. Now back to your tendon…”

I mean, honestly, Dalia, how much worse could it go? How much are you really losing by putting yourself on the line? If you have such a low threshold for embarrassment, you can get another physical therapist, but so what?

If neither of you take action because of fear of rejection, NOTHING HAPPENS. And what’s worse? Knowing that you like each other but don’t have the guts to do something? Or having a two minute uncomfortable conversation?

There’s no reason for you to show up at the lake and hope he’s there.

You’re an adult. He’s an adult. Try having an adult conversation.