Are You Trying to Get Him Back? Maybe You Should Reconsider.

Every day, I get women contacting me for dating coaching. Almost invariably, they’re calling about a guy.

But not just a guy. A guy they’ve got great chemistry with. A guy that makes them weak in the knees. A guy who could be the one… if only he weren’t being so elusive. These days, all he does is text once in awhile and hint at making plans.

It’s almost as if he’s forgotten how amazing that first intense month was.

It’s almost as if he doesn’t care.

And yet every woman who wants to know the same thing:   How do I get him back?

To which I invariably ask: Why do you want a boyfriend who doesn’t call you, doesn’t communicate with you, doesn’t make you feel special, doesn’t make an effort to show you he cares, doesn’t follow up quickly to see you, and doesn’t indicate in any way that he’s currently interested in an exclusive relationship with you?

“Because of how he makes me FEEL”.

“Well, not that, exactly. I mean, it’s not like that when we’re together.”

How often are you “together”.

It’s been a few weeks. It’s definitely not like it was in the beginning. I just want that feeling back. Evan, how can I make him want me like he did before?

Here’s what I say, ever so gently, to those women: 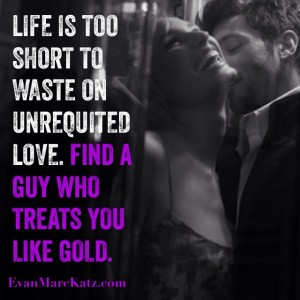 It’s not about this guy. It’s about you. If you want true power and control over your love life, it’s about breaking that pattern of trying to fix relationships with broken men who treat you like crap, and making healthier decisions about men. If your goal is to “get this guy back”, you’re really missing the point. Dating coaching isn’t about making men do anything. The emotionally unavailable guy is STILL going to be unavailable when we’re done coaching. But when we’re done coaching, you’re going to realize that you don’t actually WANT a guy who doesn’t make you feel special. You’re going to be free to have a relationship with a man who actually gives you the love you deserve. How does that sound to you?

The reason to is to learn how to let go, instead of spinning your wheels on some jackass whom, I can assure you – you do NOT want to spend the next forty years with.

Life is too short to waste on unrequited love. Find a guy who treats you like gold.

That’s what it’s all about.

Discover what men are really thinking so you can finally date with joy and confidence.
34 Shares
Tweet
Share34