I Am Not Attracted to Boyfriend Physically. Can We Possibly Have a Future Together? 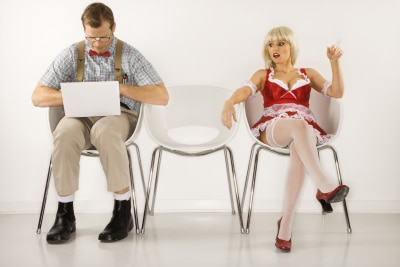 Hi Evan, I am in a very tricky situation and don’t know what to do, I found your website and your advice is great. I hope you will answer my question, I need your precious advice too. I met a man online a few months ago, and, to make a long story short, we met, we are a great match intellectually/emotionally. I am concerned sometimes he is too attached to me and the way he started to make long-term plans with me quite soon, but this isn’t a real problem.

The real problem is that I don’t find him attractive. He is not ugly but I don’t like his features and overall appearance.  Physically, I find he is not a “match” for me and I am not proud of being so shallow.  I don’t know what to do because other than that he is just perfect and I like him very much, he makes me feel very good. But I am not sure if I should be making plans with a man I don’t feel much attraction for. I decided to tell him the truth about my feelings and he said he will take all the steps necessary to improve himself physically as he doesn’t want to lose me.  I am torn. Is he really the man of my life if physically I don’t like him the way he is?

Thank you so much for your help. Mia

Mia, I can’t answer your question, because NOBODY can answer your question. Attraction is the big X Factor in any relationship. When you have it, you don’t think twice about it. When you don’t have it, it’s hard to overcome, which would seem to indicate that you should break up with your boyfriend. Not so fast. I’ve put a lot of thought into the pros and cons of how much you should weigh the lack of physical attraction to your partner. I urge you to consider this before taking any rash steps.

Reasons for Staying Together Despite a Lack of Physical Attraction

Ask most long-term married couples about the relative importance of sex in their lives or relationship, and they will generally say things like, “It’s the dessert, not the main course.” And it’s true. It’s just hard to consider that when you’re 27. But realize that in 10 years, you’re 37, raising little ones, and your life is no longer your own. By 47, your bodies have thickened and drooped. By 57, you’re probably finishing menopause, and his libido is largely gone. By 67, you’re thinking of retirement, travel, and grandkids. By 77, you’re hoping just to stay healthy, and …

Can you see how making snap judgments based on physical attraction towards your partner is a perfect example of short-term thinking? Like getting a tattoo with your boyfriend or someone’s name on your back and breaking up four months later. The truth is that life lasts for a REALLY, REALLY long time.

And yet, we base our relationship decisions on evanescent emotions like lust, passion, and chemistry. Fact: In relationship studies, traditional “attraction” wears off within 18-24 months of dating. This probably corresponds to what you’ve experienced in real life – namely, that it’s hard to get “excited” about someone with whom you’ve been intimate for two years straight. That doesn’t mean it’s impossible in a relationship, but if you ask most married couples, the nature of sex changes. Sure, you might be that rare “three times a night” couple well into your fifties, but most of those clichés about parents not having time or energy for sex are true.

So if life becomes more about responsibility, friendship, compatibility, and all those other “boring” things that old married couples cite in a relationship, how much emphasis should we put on physical attraction in our 20’s/30’s? It is no secret that compatibility is a stronger predictor of relationship health than chemistry. Yet chemistry is what we chase with our partner– somehow hoping that it turns into compatibility as well. It rarely does. Look at your most “passionate” relationships. Where are they now? Exactly. Yet, we can’t help ourselves. We’re attracted to what we’re attracted to – often to our own detriment. Which is how men end up with hot crazy women, and women end up with hot, emotionally unavailable men or a partner.

This isn’t my opinion. This is life. Just look around. Does this mean that you should continue dating someone you’re not physically attracted to? Ah, if it were only that simple…

Reasons to Break Up Because of a Lack of Physical Attraction

As you know, sexual attraction rarely grows over time. With men, this almost never happens. With women, it tends to be correlated to their feelings about their partners. However, this is presuming a steady baseline of attraction from which to grow in a relationship. If there is NO physical attraction to start, there’s not even any room to go down. That’s a rough proposition for you to endure with a boyfriend you’re not physically attracted to. Thus, it’s counterproductive to try to convince you to give a shot to someone you’re NOT attracted to. No rational thinking is going to overcome your genetic and cultural biases in a relationship.

So we discriminate on age and height and weight and dozens of minute details of which we may not even be aware. Then there’s the Paradox of Choice. We dissect others physically, although none of us wants to be dissected physically as well. I can explain this phenomenon – as author Barry Schwartz did for a few hundred pages in his amazing book, but, at the end of the day, we can’t help ourselves. As old-school dating guru David DeAngelo says, “Attraction is not a choice.” We’re still going to crave choice and variety and something approximating societal ideas of perfection towards our partner, however unrealistic this might be.

In a good relationship, sex is the dessert, not the main course

If you doubt this yourself, go to an online dating site and make a list of your “favorites.” Odds are, they’re going to be among the most physically attractive singles on the dating site. That doesn’t mean that you don’t care about who they are as people – what they do, what they earn, what they believe – but it all starts with physical attraction. The problem is that when we compare people side by side, great catches often lose out. Why respond to the 5’5″ guy when there are six-footers out there? Why go out with the heavy-set person when you can write to a lean model-type? Why go out with the 45-year-old when you can try the 29-year-old? Once again, this isn’t my opinion. 20/20 did relationship studies years ago in which women were more likely to date a cute 6’1″ plumber than a 5’4″ heart surgeon/concert pianist. But hey, you can’t help what you’re physically attracted to.

That doesn’t mean you’re shallow – no more than anyone else. It just means you’re a human being. The other long-term thing to consider about why it’s important to have an attraction to someone else is that in a monogamous relationship, there’s only ONE person with whom you’ll be having a honeymoon phase or sex for the rest of your life. In that case, well, you’d BETTER have some measure of physical attraction. Anything less is a recipe for wandering eyes and future infidelity.

Which brings us to the moment of truth. You know that in a relationship, sex is the dessert and not the main course…but you know that this is the only person you’ll ever be with again. You know that companionship is more valuable than lust over 40 years…but you know that attraction is important in a relationship and won’t get better over time. So should you stay in your relationship, or should you go if you’re not that physically attracted to your partner? It all comes down to your own internal compromise mechanism. Because there’s a difference between observing that your boyfriend got a paunch and being physically repulsed by him, only you can decide. If not attracted to boyfriend anymore and turned OFF by him, the whole thing’s a non-starter.

You’re not doing yourself (or him) any favors by staying if you’re not attracted to your partner, and he has no ability to excite you. However, if he’s somewhere in the broader spectrum – something like a 6-7 on the attraction scale, you may want to think twice before you toss him back in the sea. First, ask yourself if your boyfriend – or another man – could dissect YOU physically as well. How about emotionally? Intellectually? It’s simple to find fault with others, but there’s a certain grace and wisdom in loving people in spite of their flaws, just as you’d like to be loved in spite of yours.

Second, ask yourself if your boyfriend – despite your middling physical attraction for him – can make up for it in bed. If he’s energetic, passionate, and devoted to your pleasure or feelings, he may be more valuable to your love life than someone who is more aesthetically pleasing with the lights on. Finally, ask yourself if you can do appreciably better in a relationship even if you’re not attracted to your partner. We often underestimate how rare it is to have a partner who loves us unconditionally.

Very often, the second you assume the grass is greener is the second you may find yourself in an exciting new romance…with a guy who only texts you once a week. Attraction is an intensely personal choice and is fundamental to maintaining a healthy sex life in relationships. But don’t lose sight of the fact that you’re better off with a 7 in attraction and a 10 in compatibility than you are with a partner of 10 in attraction and a 4 in compatibility.