Home > Blog > Letting Go > My Boyfriend Is Addicted to Gaming 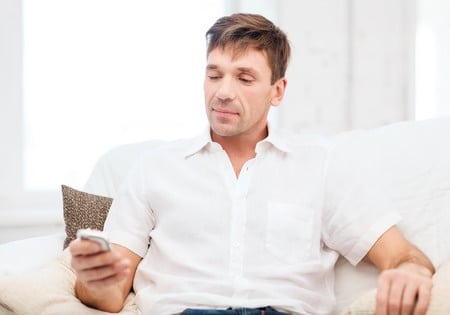 I’m dating a guy in his mid-thirties who is ADDICTED to a Smartphone app game. We have been dating for almost 6 months. His addiction and obsession with this game is becoming unbearable. His gaming caused a rift in our relationship early on and I have brought it up several times. However, his efforts to cut down haven’t been sufficient. I understand that guys like to play games but I feel his case is extreme. A couple of examples to describe the various scenarios:

1. When we dine out — he’s constantly checking and playing the game. I feel like I am dining alone most of the time and resort to killing time with my iPhone.
2. We went on a trip together — he played the game every morning and every night (we paid extra for wifi connection so he could play).
3. We usually talk every night before bed. His game status/progress is usually the topic of conversation.
4. He spends a minimum of 5-6 hours playing this game each day. And, when I confront him, he insists that he doesn’t play THAT much.
5. Before/after sex — he plays the stupid game.
6. I stayed over at his place when I was sick. He was sweet and took care of me but I also noticed that during that time, he played almost nonstop. One night he played from 10pm until 4-5am the next morning.

Since we only dated a few months, I feel like this is the time we should spend quality time with each other and learn more about each other. But, I can’t figure out how to accomplish this if his number one focus is always this game. Every time I confront him about this, he calls me a drama queen.

Is this a big red flag?

“What are you GETTING out of this relationship?”

This red flag is so big that I believe it’s covering your eyes and ears and mouth and brain.

Put simply: what are you GETTING out of this relationship?

The fact that he defends his indefensible behavior by calling you a “drama queen” is indicative of how he’s lost touch with how normal humans interact.

He lets one aspect of his life dominate him so much (in the name of passion) that he loses sight of how it negatively impacts others around him. The fact that he defends his indefensible behavior by calling you a “drama queen” is indicative of how he’s lost touch with how normal humans interact.

It’s not your job to talk to him, try to bond with him or help him rehabilitate. Just let him become someone else’s problem, then find another guy who doesn’t have a crippling addiction.

There’s lots of ‘em out there, I promise.