How Do I Know If I’m Ready For A Relationship?

A bit of background: I’m 36, divorced after a 9-year marriage (11 together). That was over 2 1/2 years ago now. I’ve been moving on with my life, getting my career going and chasing my dreams while dealing with the fallout that comes from a divorce. Overall, I’m happy with where things are headed in my life and I’m even fairly content being single. That being said, I’ve had a casual dating relationship (ie, no “long term” commitment) and found that after a couple months I was not as content with that arrangement as I thought. I wanted to be a little more important in a guy’s life.

On the flip side of that, there are things (career and my main hobby) that I refuse to give up for a relationship – doesn’t mean I can’t or won’t make time for someone, but those two things come first. I was raised just the opposite – the woman gave up everything for her man. My marriage was much like that, where my career and my goals were ALL secondary to his. I’m prone to defaulting to that when I’m in a relationship, but am not willing to live like that again.

How can I tell if I’m actually ready for a relationship myself? Personally I feel like I’m right on the cusp – it could totally work with the right guy, but I’m not desperate enough to give up my life to make it happen, either. Short term dating and relationships have been fine, with the usual ups and downs, but part of me wants something more committed, but I’m not sure if, in reality, I’m ready for that, or if it’s just my programming that tells me I’m not ready…any insight you have would be very helpful as I formulate my outlook on what I’m looking for in a guy!

Reread your own email, especially that last paragraph. You’re conflicted. Confused. You’re playing both sides of the fence, and you’re asking me to push you towards one side. I don’t think I’m going to be able to do that, but I do think I can share something important today.

First of all, you need to understand the concept of “overcorrection,” as it pertains to dating. I’ve talked about this privately with my clients for years, but have never put it in writing before.

Basically, overcorrection is the act of overcompensating for the failures of a previous relationship by going to extremes. The woman who was in a sexless marriage chases passion. The woman who dated the slacker chases money. The woman who lacked chivalry chases a thoughtful, generous guy. And so on.

Overcorrection is the act of overcompensating for the failures of a previous relationship by going to extremes.

You happen to be the woman who had a husband who put himself first, and so your reaction to it is, “I’m not letting THAT happen again. This time, I’m putting ME first.”

You know the problem with that, right? We all want partners who are willing to put us first. Thus, if you continue to approach your life with a “me first” attitude, what kind of guys are going to stick around for that? Probably men who are a little weaker, a little needier, and a little less attractive. A more confident man is going to find a girlfriend who makes him feel more important – just as you did when you left your husband.

As always, this isn’t a black and white thing: I’m sure there are some alphas who think having a self-centered partner is kind of hot; after all, what’s more attractive than a woman with passion and purpose?

The problem is that he doesn’t get much out of your goals and dreams and hobbies. You can make the argument that he gets a happier girlfriend, but again, what’s the value of a happy girlfriend if she’s theoretically busy 60 hours a week or 5 nights out of 7 You didn’t like being married to a man like this, so why would a man want to be with a woman like this? 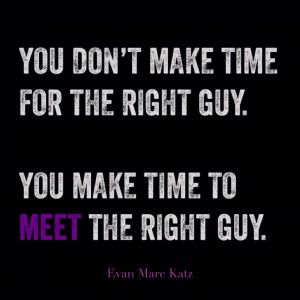 It seems to me like you’ve turned this into a black and white issue, when it’s anything but. No partner should ask you to “give up” your career and your main hobby to be with him. At the same time, if you put your career and main hobby before him, a lot of men aren’t going to stick around.

You don’t make time when you MEET the right man, you make time TO meet the right man. And if you’re caught up in AJ-time all the time, you’re severely decreasing your opportunity to both meet him and keep him.

You want to have a healthy, long-term relationship where both parties feel like they’re getting the better end of the deal.

Hopefully, you can find a balance where you don’t feel you have to sacrifice yourself, but your boyfriend still feels like he’s a top priority to you. The reason you do this isn’t because you’re “desperate,” as you suggested, but because you want to have a healthy, long-term relationship where both parties feel like they’re getting the better end of the deal. That’s what marriage is all about.

You don’t have to lose yourself in a partnership, but you do have to be willing to give a LOT to be a worthy partner. That’s what you seem to be missing at this point in time. Good luck.