Forgiveness Is the Key to A Happy Marriage

When you’re married, you have to make tens of thousands of decisions as a couple over the course of a lifetime. By that standard, it stands to reason that there are going to be more than a few disagreements along the way. Factor in that all of us are innately selfish (as we should rationally act in our own self-interests) and well, it should be no surprise that there will be a measure of conflict in even the best relationships.

We want to exact a pound of flesh from our partner to teach him a lesson.

The question is whether it’s the kind of conflict that should derail a relationship. Most times, the answer is no, but that’s not the way we handle it. We want to be “right” and make our partners “wrong”. We want an apology in the manner we want it. We want to exact a pound of flesh from our partner to teach him a lesson. And all this does is perpetuate the cycle of negativity and arrogance that rots relationships from the inside.

I tell my private dating coaching clients that happy marriages are based on humility and forgiveness. There is no finger-pointing, only problem-solving. No “you should act the way I want you to act”, but rather, extreme tolerance over your partners’ different opinions. Marriage is all about choosing a flawed spouse whose flaws you can accept and realizing that your spouse patiently accepts your flaws as well.

This piece on the Good Men Project, by Nate Bagley, really nails the concept of leading with forgiveness. Money quote:

“Forgiveness is allowing yourself to move on. Forgiveness is letting go of the burden of a grudge. Forgiveness is not allowing someone else’s choices to ruin your life. Forgiveness is acknowledging the imperfectness in us all, and chalking up mistake after mistake to being human… Those who never learn forgive will never have hearts open enough to truly love… because, one forgives to the degree that one loves.”

Find the man you can accept and I promise: he will give you his everything.

If it ever sounds like I glorify my marriage, it’s because my wife embodies this concept better than anyone I’ve ever met.

You want to know what men value more than looks, wit, intelligence or common interests? Acceptance. 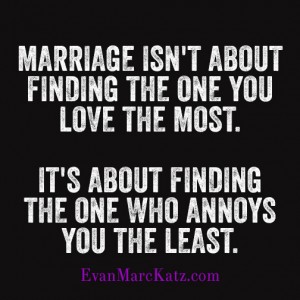 That includes accepting things that you don’t like about him and largely keeping quiet about it, as long as it’s not hurting you. If you can’t accept him as he is, then don’t date him. But don’t be in a relationship with a guy whom you feel you have to constantly micromanage, where he’s forced to apologize a hundred times a day. You won’t be happy. He won’t be happy. And all the love in the world won’t save your relationship.

The only thing that will sustain a couple is patience, tolerance, forgiveness and acceptance. Find the man you can accept and I promise: he will give you his everything.

Your thoughts below are appreciated.

If your relationship is making you feel anxious, you must learn these 8 reasons why.
270 Shares
Tweet
Share270