Nurturing a Baby AND a Startup Business 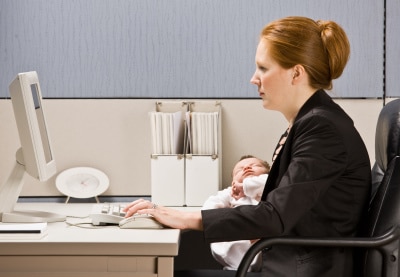 A recent New York Times article talks about women who are both mothers and founders of start-ups. The premise of the piece is that venture capital firms discriminate against women because start-ups require so much time and attention that a mother simply can’t do the job.

“If investors meet a male founder of a company, they don’t care whether he has two or three children because they assume that his wife will take care of them, Mr. Craig says. “But with a female founder,” he adds, “it’s a whole different story.”… Women make up 10 percent of the founders at high-growth tech companies, “and they raise 70 percent less money than men do because of their lack of access to capital,” says Lesa Mitchell of the Ewing Marion Kauffman Foundation, where she is vice president for initiatives on advancing innovation.

“All of the women I know who went to raise money did it when they didn’t have kids,” she says. “There is total discrimination in the start-up world against women who are pregnant.”

All I see, from my perspective as a dating coach, is how anyone involved in a start-up (or related to someone involved) has to sacrifice personal time.

“Ms. Fleiss’s husband took care of Daniella for three days while she was in Los Angeles for work. They alternate doing the morning feeding. At night, he often puts the baby to sleep while his wife reads and replies to e-mail.” Or, from later in the article, “Outside help is essential. Ms. Roney says: “I barely have time to put on lip gloss. Luckily my assistant fills my work closet with makeup and dresses so I can attempt to look presentable for the potential meetings and TV segments I may have that day.”

This only goes to further my thoughts that

Read the article here and let me know if you’d like to be partnered up with someone insanely wealthy…but insanely busy.