Home > Blog > Meeting Men > Online Dating > Am I Being Unfair Not Giving My Phone Number Until I’m Ready? 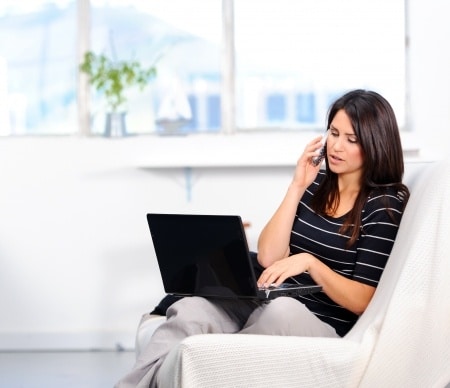 Hey Evan, I have recently started chatting with someone on a dating site and he keeps asking me for my phone number. He says he doesn’t use the internet much on weekdays, but I’m reluctant to give anyone my phone number until I have chatted with them for a period of time.

Am I being unfair with this expectation of not giving my phone number out and preferring to spend weeks on online chatter? I actually do like this gentleman, which is unusual for me. Thanks in advance for your answer.

I figure this is as good a time as any to float a pretty non-controversial theory of how to be successful in dating. Ready?

Okay, so you know what a Venn Diagram looks like, right? Two circles that overlap in one area. Hold that in your mind for one second.

The problem in dating is when you think your circle is the “right” one — even when it doesn’t overlap with anyone else’s circle.

You’re one circle. He’s the other circle. The place where your circles overlap is your relationship. The more they overlap, the healthier it becomes.

The problem in dating is when you think your circle is the “right” one — even when it doesn’t overlap with anyone else’s circle.

This is where I came up with the idea (espoused in Why He Disappeared) of “effective vs. ineffective”, as opposed to “right vs. wrong”. Example:

Guy wants to get laid on the first date.

Girl wants to save herself until marriage.

Is either of them “wrong”? No. I would suggest that both will find their stances largely ineffective in dealing with the majority of the population.

Is it possible to find a woman who’ll have sex on Date 1? Sure.

Is it possible to find a man who’ll wait until marriage before having sex? Sure. But there are a LOT fewer people who will agree to either.

This Venn diagram theory goes for pretty much everything in life. If you think something is reasonable, but nobody else on the planet agrees with you, you’re going to be more effective by finding a compromise point closer to the majority position. If you don’t, you may be left standing alone.

Men who don’t pick up the full check on Date 1 are not “wrong”, but they are ineffective.

Women who ask men if they will commit on Date 1 are not “wrong”, but they are ineffective.

All in all, Janelle, you’re not “wrong”. But you are ineffective.

In the Venn Diagram of Online Dating (copyright, Evan Marc Katz), men’s circle is Speed. Your circle is Comfort.

He wants to meet you right NOW and see you naked ASAP.

You want to “chat with him for a good period of time,” and after “a few weeks of online chatter”, you’ll give him your phone number. Then, presuming a few phone calls go well, you want to meet him for a safe coffee date at 2:30 on a Tuesday, so you can have a quick exit strategy if you don’t click.

Both of you are ineffective. And by ineffective, I mean that by not being able to understand (much less cater to) the opposite sex’s point of view, you’re pretty much eliminating your options.

You don’t want to do things his way.

He doesn’t want to do things your way.

Neither of you is wrong. Both of you are ineffective. And by ineffective, I mean that by not being able to understand (much less cater to) the opposite sex’s point of view, you’re pretty much eliminating your options. You know as well as I do that women don’t want to be bullied into going on blind dates:

“Hey, Janelle. Read your profile. Think you’re attractive. Not good at this email thing. Let’s see if there’s chemistry. Here’s my number. Call me. Let’s go out on Saturday night.”

By the same token, he doesn’t want to receive an reply that says, “Dear Dan, thank you for your initial inquiry. However, I’m very uncomfortable giving you my phone number. Who knows? You may be a serial killer or stalker. Besides, your profile doesn’t say very much about you, so maybe if you tell me more about yourself, if we click, then, maybe in a few weeks, I’ll give you my phone number and we can go from there.”

This is the entire reason that I came up with a strategy that works for both men AND women.

It’s called the 2/2/2 Rule (two emails on the dating site, two emails off site, two phone calls and then a date). I spend about a half-hour explaining it in my Finding the One Online audio program, which helps women flirt and connect with quality men online.

If you’ve ever wondered why you struggle with men, it’s quite likely because you’ve never given much value to HIS circle in the Venn Diagram.