Home > Blog > Online Dating > How Do You Know If It’s Worth It To Try a Long Distance Relationship? 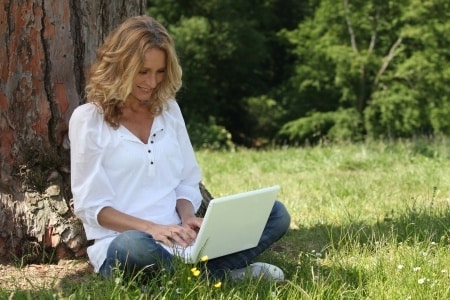 I have seen a lot of interesting questions about dating and the internet. So here is mine: How do you know if this guy that talks to you on the phone for hours every day…and lives overseas…is for real?!?

Let’s see a tell-tale list of signs for women to know when he IS interested. I, like most women, think we have guys figured out but are so wrong most of the time. Men DON’T usually share their feelings or sometimes are afraid to I guess. So we play the “let’s read into everything he does” game.

Keep in mind this is an international relationship and not the boy who lives 30 minutes away and I can meet him anytime.   So how do I know if it’s worth it or if it’s all gonna be like a giant bomb exploding around me because what we have online or the phone just can’t be sustained “in real life.” I would like to know what to look for.

I trust you’re asking me if this relationship is real, as opposed to the person. Because believe me, there are people overseas who are out to scam you out of your money, and you should be aware of that. Generally, scammers will show interest in older women or men who haven’t been getting much attention online. Then, they’ll develop a rapport over a few weeks and ask you to send money. And when you do, you’ll never hear from them again.

I remember one nice Midwestern man calling American Singles customer service (where I was working in 2001) to complain about a Russian woman he had met on the site. Apparently, he had fallen in love with this woman, who, in turn, asked him to send her $2000 so she could move to the United States. There was nothing the site could do — as all they had on her was an email address, a fake name and a cancelled credit card.

But assuming you’re asking me about long-distance relationships, Charoa, yeah, I’ve got a few ideas.

As it stands, I’m driving up to San Francisco in a few minutes. There, I’m going to have breakfast with my little sister who has left New York to move in with her boyfriend that she met on Nerve.com.

My best girl friend from high school has just moved from New York to Baltimore to move in with her fiancé that she met on eHarmony.com.

A woman I briefly dated cross-country who told me she’d never leave New York is now living in Santa Monica with her husband and new baby.

If you can find a guy who lives closer to you, it will be much easier to establish, maintain, and/or drop the relationship quickly.

These are real stories of real people who are really close to me.

And yet, I still wouldn’t recommend a long-distance relationship….

Not unless you have a choice. I may link to it every other column, but it’s important to remember that you’re As Valuable As Your Options.

If you can find a guy who lives closer to you, it will be much easier to establish, maintain, and/or drop the relationship quickly. As it stands, everything gets slowed down when a guy’s overseas.

Back to your question:

So how do I know if it’s worth it or if it’s all gonna be like a giant bomb exploding around me because what we have online or the phone just can’t be sustained “in real life.”

Well, let’s look at it logically. If 99.9% of the men you’ve ever met are ones that you don’t want to marry, what are the odds that the guy who spends hours on the phone with you in another country IS the guy?

That doesn’t mean he’s NOT the one, and it doesn’t mean you should suddenly stop returning his calls. I just think it’s important to not get too excited about ANYBODY before you’ve, say, met in person. In fact, it’s dangerous. Because it leads to things like your letter. Or like the “bomb” that explodes around you. Or, more likely than not, the realization that phone chemistry is different than “real-life” chemistry.

Listen, nobody stresses establishing trust over the phone more than I do. Except I’m usually talking about two phone conversations in a week before you meet. When you let anticipation build up for a month or three prior to meeting, you set yourself up for three scenarios:

You see him, the chemistry is not there. You’re very disappointed. Crushed, even.

You see him, the chemistry is there. It’s on. You live happily ever after.

You see him, the chemistry is there. You throw yourself into it headlong. But due to the distance, all you ever have are week-long trips that seem like vacations. You never know what it’s like to just be normal together. So if either of you are to turn this into a regular relationship, someone’s going to have to uproot his/her life and take a big leap of faith that chemistry is a good precursor of compatibility.

Frankly, I think chemistry is just chemistry. There are lots of people I’ve had the hots for. There are very few I could spend my life with….

How often does he email you?

How often does he call you?

How quickly after meeting does he talk about meeting again?

Is he willing to make big sacrifices to make a relationship work?

Is he actively dating online even when you are “committed” to each other?

Can you be authentic with him without scaring him off?

Do you trust him enough to be secure when you haven’t heard from him in a bit?

All of these questions can reveal a man’s emotional investment in you. But beware of a guy who passes all of these tests. Sometimes a man’s willingness to throw himself into a long-distance relationship means that he doesn’t have much of a life worth preserving at home. Many people who you might want to be with are firmly entrenched because of their businesses, families, friends, homes, etc. Be wary of someone who’s willing to instantly throw it away for a stranger he met on the internet.

To sum up: long-distance relationships can work. But if you’re looking for that master list that will give you every reassurance that your time is well-invested, I’m not going to be the one to give it to you.

I’ve said it before and I’ll say it again.