Home > Blog > Online Dating > How To Use (Or Not Use) Tinder, Hinge, and Bumble 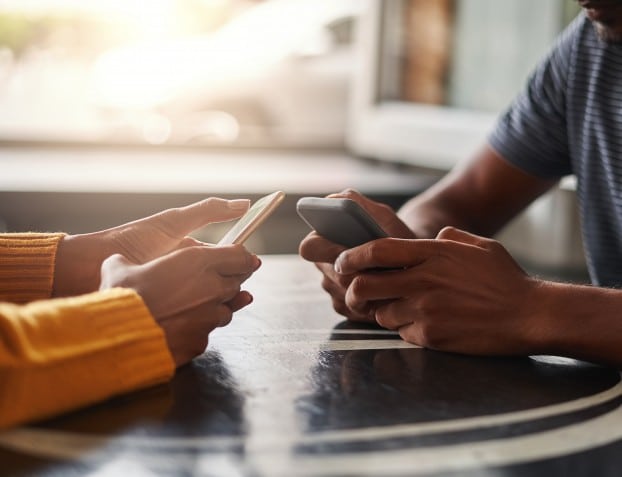 The world is changing rapidly.

When I started dating online in 1997, I was one of the first people to do so (much less admit it). I started on Matchmaker.com, followed by Match, JDate and a host of others.

By the time I wrote my first book in 2003, the New York Times Magazine quoted me in a cover story about how online dating had gone mainstream. I was then known as the founder of e-Cyrano, the first online dating profile writing company.

By then 40 million people had already tried online dating.

We were just getting started.

The iPhone wasn’t invented until 2007.

GPS-enabled smartphone apps like Skout and Grindr were invented in 2010.

Tinder launched in 2012 and has since been downloaded 100 million times.

I’m almost positive you’ve heard about it, but if you haven’t, Tinder is like online dating for the impatient and shallow.

(Nothing personal, Tinder users – I’m just talking about the medium itself.)

Your Tinder profile consists of name, age, photo and 500-character bio. Profiles will come up based on how geographically close you are to someone. If you think he’s cute, you swipe right on your phone. If you don’t, you swipe left. If you both swipe right, you get to message through the app. It’s easy to see how addicting Tinder can be. Some men swipe right to all women because swiping right at least gives him a chance at you if you swipe right in return.

As a result, men and women alike swipe through human beings as if they were changing channels on a TV with an infinite number of shows.

Everyone becomes disposable…because they are.

Bumble is like Tinder with one major difference: after a match is made, women must message guys first – thereby eliminating unwanted spam from aggressively texting men. It also has filters for pornographic material, which Tinder does not have.

Hinge is a dating app that connects people who are in related social circles on Facebook, as opposed to random strangers whose main qualification to write you is having a thumb.

Coffee Meets Bagel is a little more detailed and less frenetic, allowing you to chat for 8 days before the chat room expires.

The point of this is not to endorse (or not endorse) any specific dating app, but rather, to let you know what your options are and give you the best chance of succeeding.

I see why people use apps – and, in my experience, if you can get past the odd combination of hyper-aggressiveness and flakiness that comes with dating apps, there are no shortage of good men using them. Why? Because they have failed so prolifically at online dating, and it’s a lot easier to swipe right and write, “Hey” than it is to compose a thoughtful first email.

You don’t want more dates. You want higher quality dates with men who are more invested. So you turn your hopes to a tiny instant-gratification machine that gives you spikes of dopamine every time you see a hot guy and swipe right.

It’s not that dating apps are “bad” or “wrong”; it’s that the very nature of them is to lubricate communication and make things go faster. Suddenly, because it’s so “easy” to meet, you’re texting a dozen guys and have six of them pushing to meet you ASAP, while the other six disappear because they’re texting a dozen women as well.

Are you happy with this? I didn’t think so.

If you’re going to do it, you’d be wise to supplement with a large, name-brand site (Match, OkCupid, etc), because anyone who is willing to fill out a long profile may – in general – be more serious than a guy swiping right to every single woman on his free dating app.

Also, if you’re going to make the most of dating apps, it sure would help if you knew how to get the most out of them. How to write a compelling (if brief) profile. How to post a great photo. How to funnel men from the app to the phone before going on a date.

This is why I created Finding the One Online. It doesn’t directly address dating apps, but the principles involved remain the exact same.

All of this and more can be yours, just by clicking here.

Soon, you’ll have you pick of the litter when it comes to men on dating apps – and have the ability to make them invest time and energy in you before you go on another bad first date.

Imagine the feeling of MASTERING Tinder, Hinge and Bumble so that you can confidently swipe your way to the good guys.

That’s in your control and I’m excited to hear your success story.

P.S. After a messy, painful, divorce, Susan wondered whether she’d ever find love again. Here’s how Finding the One Online transformed her life.

I am a 55-year-old woman with three boys (20, 18, 14) who had been married for 26 years. My divorce was painful, messy, and long. The dissolution of the marriage was complete with infidelity, lies about money and ugly divorce tactics like bullying and forced depositions of me, etc.) Yuk. My confidence was in the toilet, my self-esteem was down the drain and I was shaken to the core by a divorce I didn’t want.

BUT…I was lonely and I wanted companionship so once the divorce was final about a year and a half ago, I tried online dating.

Before I purchased the digital versions of “Finding the One Online” and “Believe in Love” I was lonely, frustrated and sad. I had been on a few dates with several guys but I was despairing of ever meeting anyone. It seemed like I wasn’t connecting with anyone and the people who did show up with an interest in me were not quite right for me. At the very least there was zero physical attraction. For a while, I thought I would just have to live with that.

I took a break for 6 weeks from online dating while I re-did my profile. (I had also started a new teaching job so I needed to take time to adjust to that as well.) Re-writing my profile with your advice was one of the most fun things I did.

I got better pictures that showed ALL of me and in every one I was smiling.

I received immediate results from my new profile on Match. (I paid for my membership because I knew I was worth it.) I reached out to 2 new guys every day, right away I went on 3 first dates that were fun and nice even though they didn’t go further than that. (One guys I turned down and two didn’t call again which was okay with me.) I was communicating with 6 to 8 guys at all times.

Then I got an email from someone on Match who said, “Wow, what a great profile. No need to wash the boats, just come see them.” I had used Evan’s profile writing advice to write little ‘stories’ about what I would do as a girlfriend. I had said I’d help them wash their cars or boats.

By the way, this guy did NOT fall into my criteria for education. But I had been taking your advice to open myself up to all kinds of men and looking at how they made me feel and

what actions they took rather than some list of arbitrary stuff I had in my head.

Although I’ve only been seeing this guy for a few weeks, I am extremely comfortable around him. There is something about his voice that makes me melt and he has followed up, asked me out several times and I’ve been brave enough to ask him to do a few things with me and yes…even have sex with him which was a big step for me after being with only one guy for nearly 30 years. (It was great — the new sex that is!)

I don’t know what the future will be. He is different from me and I am different from him. We both are looking for long term relationships. One day we will talk about that, but for now I am really happy seeing him as much as our schedules will allow and getting know him.

Thank you from the bottom of my heart, Evan. Your authentic, heartfelt kindness is a treasure. I could say so much more because love and relationships are complicated topics, but for today, I just want to really say thank you. My love life is 180 degrees from where it was before I purchased your materials.

Your friend in Maine,

If you’re ready for your love life to spin you 180 degrees into the arms of your Mr. Right, click here and we’ll make it happen.