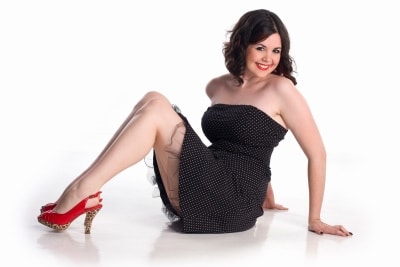 I have been online dating for about two months and it’s been so-so thus far.   My problem is deciding how to list my body type.   I’m 5’3″ and an hourglass-ish size 10, so while I’m not obese, I’m definitely not “athletic and toned.”   I chose pictures that I think accurately show this.

Anyway, at first I listed myself as “A few pounds extra” thinking it was an honest description.   Well, two male co-workers were talking about online dating and mentioned that they’d never contact a girl that was in that class or “curvy”, because any time they’d met one in the past, she’d been much heavier than in her pictures.

I’m wondering if this is why guys will view me a lot, but won’t make contact. The guys who have made contact have been people that I probably would not have dated normally, i.e., no steady job or just a little odd.

On the next episode of Online Mythbusters, we will learn:

You have to be asking yourself — is it REALLY in my best interests to tell the truth if 95% of guys are going to dismiss me for doing so?

The good news, Nicci, is that all of the answers can be derived from the same exact technique — flipping things over to consider the other person’s point of view.

Let’s start with you, because a) you wrote me the note, and b) you’re an online dating anomaly — an honest size 10 who doesn’t claim to be athletic and toned.

However, after talking to your male co-workers and observing that you’re not being contacted, you have to be asking yourself — is it REALLY in my best interests to tell the truth if 95% of guys are going to dismiss me for doing so? This is the online dating dilemma that faces MILLIONS of people each day. If I’m a 5’4” man, I know that it’s going to be hard to get a date if I tell the truth. If I’m a 50-year-old man who makes less than $30,000/year, I’m going to be somewhat handicapped. And few people face more discrimination than women in their 50’s and 60’s, who only seem to get email from men who are MUCH older.

Most of these people are good people — and yet they give in to the temptation to lie. Why? Because telling the truth is a FAILING strategy. This is the explanation for why women don’t tell the truth about their bodies. Simply put, there’s very little reward for having integrity. At the very least, heavier women (like shorter men) feel that if they can convince someone to go out with them, they’d have a chance in person….

Except this isn’t true either, because most people feel duped by the disconnect between your description and real life stature. Heavier people almost always do better in “real life” than online.

Next myth to be busted: why men don’t go out with “curvy” women. Well, you touched on it yourself, Nicci, in your email. In their attempts to be honest (but not scare off men), women will click on descriptors like “a few pounds extra”, “curvy”,   or “voluptuous”. All are considered euphemisms for “fat” by men. This creates a vicious circle. Women know that men prefer thin, so they adjust their descriptions accordingly. Men have learned to mistrust these body types, and therefore only look at women who are “firm and toned”, “slim/slender”, or “athletic”. And when the slightly overweight woman shows up on a date with a man who was expecting “athletic”, both parties are in for a night of disappointment.

Why do men look at you and not write to you? First of all, I think that’s a problem that’s more in your head than in reality. Fact is, we all window shop online. How many men have you looked at? 1000? How many did you write to? 12? Should 988 men feel rejected because you didn’t initiate contact? Please. Ignore how many people look at you. It is misleading and can only serve as a tool that makes you feel rejected. If no one’s WRITING to you, however, there is something to think about. Which is why I’ve helped thousands of people rebrand and market themselves successfully online over the past nine years. Better photos, better essays, better usernames, better email technique. Do everything 25% better and it can make a remarkable difference in your life.

Still, no matter how much rebranding we do, life is still not going to be fair. Men are still largely going to prefer young, thin women. Women are still going to prefer tall, successful men. All we can do is tackle this confidently, and not get too thrown by the many bumps in the road. The man who wants you is going to WANT a curvy girl. No point in getting bent out of shape about the ones who prefer skinny chicks, y’know?

Finally, the last myth we’re gonna bust is that there’s something about your profile that’s attracting the wrong kind of men. I swear to God, I have heard this complaint every single day for nearly a decade. And it always baffles me. So let’s play the game I play with my clients on the phone:

Me: If you were to go to an airport and look around the terminal, what percentage of men would you date?

Me: Then why would you expect the percentage to be any higher online? If, by definition, 95% of men are wrong for you, it should be expected that many will be unemployed, uneducated, older and inappropriate. Get over it. They’re allowed to take a crack at you, and you’re allowed to ignore them. Focus your energies on attracting and maintaining the 5% that you want. THAT’s what we’ll do together.

Understanding this about online dating is essential to your success. And if you’ve struggled with the same frustrations as Nicci — not enough good men, all the wrong men writing to you — my Finding the One Online system is a one-stop-shop to get you the kind of attention you deserve.