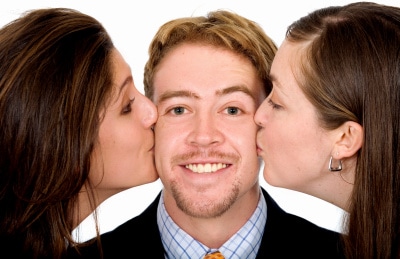 I’m new to you, but I’m a quick student. My question is not really for you, though, it’s for your wife. Has she written anything you can refer me to? Like her, I have ALWAYS believed in giving others freedom to live their lives, make their own choices, etc. I’ve not found a man that believes that’s a 2-way street.

I’m 49, out of a 20-year marriage followed by a 2-year relationship with a “player” who took advantage of that freedom. So now I am newly on the dating scene and need a fresh belief system that doesn’t trigger those old fears.

I am interested in her perspective and/or philosophy in regards to how she “deals” with the other women in your life, particularly those you might feel attracted to. I’ve investigated the “polyamorous” and “open relationship” scenarios and I don’t really think that’s what you have or nor what I’m looking for, but how does a woman handle those situations as I do believe in people having freedom in a relationship is the only way it can work. Is this a fine line?

I like your question, Kim, and while my wife is too busy running to Mommy and Me classes and shopping for our dinner parties to sit down and compose her own response, I did actually read her your question after dinner one night last week.

She was flattered and really wanted to give you the best possible answer. Her only recorded thoughts on dating have been compiled in a four-page section of “Why He Disappeared” and I’ve been told, much to my consternation, that her part is the best part of the whole book. I don’t know that I’d go that far — but I would say that learning how to best deal with an alpha male from the horse’s mouth is pretty invaluable. I’m quite candid that everything I teach comes from the “What Would My Wife Do?” school of thought and I think you’ll really enjoy it.

As to your provocative question about how much freedom you should give a man when you’re in an exclusive relationship and how do you deal with the inevitable fears and insecurities, allow me to set the record straight:

It is not at all difficult for my wife to deal with me, for one huge reason.

Unconditionally. No question about it. Wouldn’t even occur to her that I would ever do anything to breach our vows.

She knows that I value my character and morals as highly as I value anything else in my life. The way other people value religion, I value doing the right thing.

And because of that worldview, there’s nothing I can do that’s remotely threatening.

This is why I can be surrounded by five attractive 30-year-old women at a party in Hollywood and I won’t get lectured when I get home.

This is why I can get a lap dance at my bachelor party in Austin, and all my wife asks me when I come home was whether I had fun.

This is why my wife can hire burlesque dancers to join the 80’s rock band at my 40th birthday party last month. They were a big hit with everybody — and about 10 women came up to me and told me how extraordinary my wife was. Huh?

Don’t get me wrong, my wife is extraordinary, but the only thing I think is REALLY extraordinary is how RARE this kind of behavior is.

But why? Shouldn’t ALL wives trust their husbands? I sure think so. After all, what kind of relationship do you have if you don’t trust the man you’re supposed to trust?

Thus, the first thing you have to do, Kim, is to find a man that you completely trust, without a doubt. It’s your doubts that will drive you nuts, not the man himself.

Some women would be driven nuts by me, but that doesn’t mean that there’s anything wrong with me. You may think I’m disrespectful. My wife doesn’t. She thinks I’m normal and she loves the fact that I can be myself around her without any fear of retribution. And because she’s so accepting of me — a trait I’ve found very hard to find — I love her in a way that few men openly love their wives.

Now that does NOT mean accepting behavior that is inherently unacceptable.

Wherever you draw the line becomes the line

Some women freak out if he talks to another woman, has lunch with another woman, says something cute on Facebook to another woman, or looks at another woman. I think this is a bad policy because it’s essentially asking him to spend his entire life lying to you and denying the existence of any other woman. If you find a man who is willing to pretend that no one else in the world is attractive but you, I applaud you and hope you’re happy.

But since you’re a freedom-loving woman, Kim, you don’t have to do that. You just want to know how far you should go. It’s not my place to say what’s right for you, but if you believe what I do — that both sexual contact and sexual intention can be considered cheating — then that becomes your tipping point. If your boyfriend is asking for women’s numbers, flirting on Match.com, taking other women out to dinner secretly, having phone sex, or actually cheating on you, then, well, he’s broken the boundaries of exclusivity.

In other words: fantasizing, fine. Acting on his fantasies without your permission, not fine.

As long as you know your boundaries, you can give him all the leeway in the world, until he breaches your trust. Which brings me back to the three things my wife had to say about your question:

My wife trusts me so much that even when she had physical evidence that I was cheating on her (panties in the dryer), she still believed me when I swore that I wasn’t.

She trusted her gut.

My wife knows infidelity — she’s had three boyfriends cheat on her — and each time, she knew when something was wrong. Her wisdom was in not treating those men (or me) as if they were untrustworthy until they actually did something untrustworthy.

As I’ve long said, it’s either full trust or no trust. If you truly trust your guy, you couldn’t even imagine him cheating on you. He has a strong moral code. He treats you like gold. Even if he’s attracted to other women, he would never think of jeopardizing his relationship for a quick fling. And so you let everything go that is not actually cheating behavior — and watch him express his further devotion and appreciation to you.

For you will be the only woman ever who has done that for him — who was confident enough to let him be himself and not try to change him.

That’s why he’ll stick with you forever.