Home > Blog > Cheating > How Close Should My Boyfriend Be With His Ex? 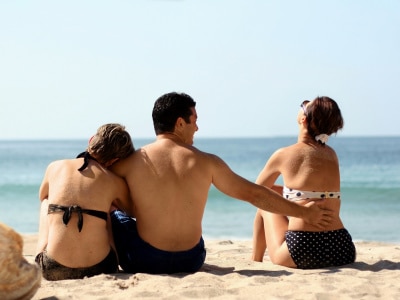 Evan,
This may be an age-old question. My boyfriend is best friends with his ex-girlfriend. They dated for two and a half years, broke up 5 years ago, have many mutual friends. They met in graduate school and went through some hard times together, so I understand why they stay friends.

However, they are way too close. They talk on the phone 2-3 times a week, meet up for lunch/dinner. My boyfriend once told me she’s so important to him that if we ever get married and have a house, she would be invited to our house for holiday dinners. The first time I met his mom, she could not stop talking about the ex. She told me their entire dating story, why they broke up, how the ex-girlfriend’s parents still think my boyfriend is the best guy for her (oh yeah, the mom is also good friends with the ex girlfriend’s parents). Of course, I was annoyed but maintained my cool. I did have a discussion with my boyfriend after this incident, and he thought his mom was inappropriate.

The ex-girlfriend also will not stop posting on his Facebook wall almost daily, with intimate posts (“awww… your stress won’t last much longer”), pictures of their families having thanksgiving dinner last year before we started dating, pictures of them dancing together back in graduate school, etc.

I don’t think her intentions are pure. I trust my boyfriend 100% and I really don’t think he’ll cheat on me with her. I just think the whole situation is disrespectful to me and her behavior is very inappropriate. He’s letting her do that to me and to our relationship. He refuses to distance himself from her and thinks I’m being unreasonable by asking him to do so. I have met the ex-girlfriend. She was extremely nice to me, so much so it felt unnatural since she doesn’t know me at all.

So, my question is what kind of friendship with the ex is too much? Where do we draw the line? Am I being a jealous girlfriend to feel the way I feel? I have dated guys who were on civil terms with their exes and I was even friends with the exes, so I really don’t think I have jealousy or insecurity tendencies, it’s just that this situation makes me really uncomfortable. —Irene

Some men are better boyfriends than husbands.

Your story reminded me of someone I know — a female friend who has a similar relationship with her ex-boyfriend. It seems pretty clear from the outside that the ex-boyfriend is her best friend and “soulmate”, while the husband is merely the father to her children. The husband provides money and stability, but they don’t truly connect the way she does with her ex. The husband seems to accept this and there is virtually no probability that she would leave him for the man she dumped seven years ago. Some men are better boyfriends than husbands, she concluded. And she’s right.

Which is why I’m not willing to go out on a limb and suggest that you’re in the same situation. After all, I don’t have all the facts. Among the important ones:

How old are you? 35-year-olds are usually better decision makers than 25-year-olds. They’re often better able to separate relationships into different components and can see things clearer in retrospect. I have a number of girlfriends that I’m appalled that I ever dated, a handful of girlfriends who were wonderful whom I didn’t appreciate, and a few girlfriends that really, would have been better off as friends. I’m guessing this guy is no different.

How long have you and your boyfriend been together? If you’re a recent couple, you don’t really have a right to say anything about how he lives his life. You don’t have any leverage on a man until he loves you, and the more you pressure him to change, the less likely he’s going to be busting out the “L-Word” any time soon.

Nothing makes a man want to cheat (or leave) more than a girlfriend who doesn’t trust him.

And the most important fact that we’re not privy to…

Who dumped whom? Usually, the person who got dumped is the one who still wanted to be in the relationship. The person who did the dumping is the one who thought long and hard about whether it was a wise decision to end a 2  ½ year relationship. If your boyfriend concluded that, all things considered, his ex was not a good fit for him in the longterm, whether its due to different views on sex, money, religion, or personality conflicts, then that’s all you need to know. Ask yourself this: would YOU take back anyone that you’ve dumped? That’s right. Neither would we.

And the real truth is that I wouldn’t take back anyone who dumped me either. Sure, at the time, I was reeling, and wishing things could be different. But then the smoke began to clear and I started to see my ex’s for what they were — normal, flawed women, not visions of perfection like I made them out to be. So even those who dumped me wouldn’t get a second shake today. Think about the men who dumped you and whether you’d truly take them back. I’m guessing you wouldn’t.

At the end of the day, it’s not my place to say whether they’re “too close”. Two to three times a week does seem excessive, I’ll admit. What I would probably suggest is that if you’re “the one” for your boyfriend, he’ll start to show it in his actions and won’t want to spend as much time and energy on his ex. You won’t have to say anything at all to make it happen. If you find you’re not getting your relationship needs met, you can leave. In the meantime, get out of your own way. You’re getting yourself tied up in knots and it’s surely not serving your goal of maintaining a healthy relationship with your boyfriend.

You’re the one who said he won’t cheat with her.

How about you start living your life like it?

Because nothing makes a man want to cheat (or leave) more than a girlfriend who doesn’t trust him.

As I’ve said many, many times before, it’s either full trust or no trust.

What do you think is going to lead to a better relationship.

And if anyone wants to get on my case about telling her to accept her boyfriend’s behavior, please go back to that paragraph where I said that if she’s not getting her relationship needs met, she should leave. But if she’s GOING to be in the relationship, the way to handle it is to be trusting, not edgy and jealous.