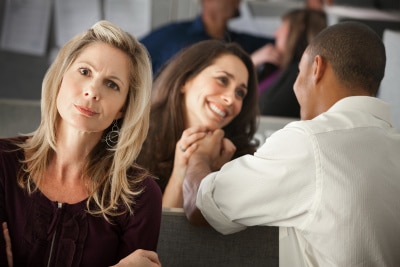 From Psychology Today, a smart and concise description of why men risk so much for so little:

Explanations (for cheating) are easy to come by, ranging from economics (He finally has enough money and status to be attractive to sexy young women at the peak of their reproductive power) to existential dread (he’s coming to terms with his own mortality by lashing out symbolically against his own impending old age and death) to the wife’s life cycle (she’s nearing menopause so he’s biologically driven toward the fertility of younger women). Each of these may have some measure of truth, but none answers the most pressing question: Why do men have such overwhelming hunger for variety in their sexual partners-not just at mid-life, but always?…

Researchers found that for men, sexual boredom was correlated with variety in partners (or lack thereof), while for women, it was more related to variety in activity. In other words, women were more likely to be satisfied by changes in the sexual what, while men (gay or straight) were more likely to respond to a changes in the sexual whom. It’s a simple, unavoidable truth almost everyone knows to be true, but few dare to discuss: variety and change are the necessary spice of the sex life of the male of our species.

I couldn’t agree more. Monogamy is very much a choice – a choice to build a life, raise a family, preserve a lifestyle, ensure security and sanctity of marriage. And because it does not mesh with men’s biological needs, it takes a strong man (or one who has lots to lose) to ignore his biological imperatives and remain faithful to one woman.

I wrote about my fear of cheating here, before I was married, and that fear remains the same today. I’m a pretty strong man, in a happy marriage, with an amazing wife. And yet I’ll never lose my desire to seek out other women. I just can’t act on it. Lots of men do, especially when time has passed, especially when things are rocky, especially when they don’t think they’ll be caught.

Acknowledging this doesn’t negate the strength of my marriage. Quite the contrary. Instead of pretending that we’ll only desire only each other for the rest of our lives, we call attention to it, laugh about it, diffuse it by bringing it to the surface. The fact that I can have these conversations with my wife – and that she understands and accepts me – is EXACTLY why I’ll never cheat on her.

THAT’s what keeps men monogamous – not the silly idea that we’ll be so attracted to one woman that we’ll never have eyes for another.