How Important Are Common Interests in a Relationship? 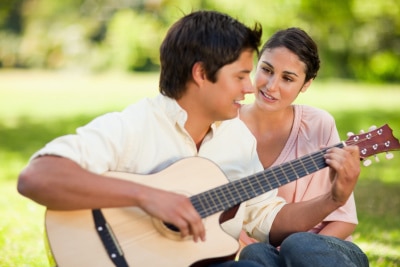 Hi Evan, I’m new to your site and advice, but I’m already hooked on your refreshingly honest advice and wisdom. I’ve read “Why He Disappeared”, and searched for some answers on your blog. There’s just one big thing I can’t seem to grasp: Is there a difference between compatibility and commonalities?

I’ve recently become interested in the artistic, sensitive type men. I’ve always been an artist myself, but have NEVER appreciated men with these qualities. I feel good about this new development, as I think it means I have more self-confidence, am less competitive, and just long for someone who understands the pros and cons of being creative for a living.

However, thanks to you, I also know that men don’t want to date themselves. This makes perfect sense to me; variety is one of my favorite things. But I do want common interests with a man, and the creative connection is now pretty important to me. Would an artistic, sensitive man ever want to date an artistic, sensitive woman? Or would we be incompatible because of these shared qualities?

Okay, let me unravel this for all the readers who haven’t read “Why He Disappeared” yet (although if you haven’t, what are you waiting for?!).

You may be the best of friends, have amazing chemistry, and really “get” each other, but if both of you have the same flaws, the relationship may be untenable.

First of all, I did say that men didn’t want to date themselves, but that statement independent of its context is highly misleading.

The point was that if you want to date a smart, strong, successful man, his greatest concern isn’t necessarily whether you have a Masters’ degree, speak a second language, or have a summer home in the Hamptons. It’s how he feels around you. Most men ultimately gravitate toward women who make them feel sexy, funny and trusted.

So do creative guys like creative women? No doubt. The problem isn’t whether such men will like you or understand you. The problem is whether your weaknesses will exacerbate each other.

Are you both highly emotional? Are you both fanciful dreamers? Are you sometimes depressed or even bipolar? Do you run from anything that seems stable because it seems boring? Do either of you have any practical skills? Will you ever be able to afford to raise children? Are either of you saving for retirement?

Because you may be the best of friends, have amazing chemistry, and really “get” each other, but if both of you have the same flaws, the relationship may be untenable. This is what I mean by compatibility.

Common interests have NOTHING TO DO with compatibility.

I will repeat: common interests have NOTHING TO DO with compatibility.

Compatibility is about respect, first and foremost. If you like running, and I don’t, we can be perfectly happy together — as long as you don’t judge me for not running and I don’t try to stop you from running.

Common interests have NOTHING TO DO with compatibility.

Runners and artists and surfers and actors and musicians and doglovers are often attracted to those who have the same hobbies. Except these hobbies are not (or at least should not be) the things upon which your marriage is based. Two doglovers that don’t know how to communicate are doomed. Two intellects that are stubborn and busy will struggle. Two skiers that can’t trust don’t stand a chance.