How Long Should I Wait for Chemistry to Develop? 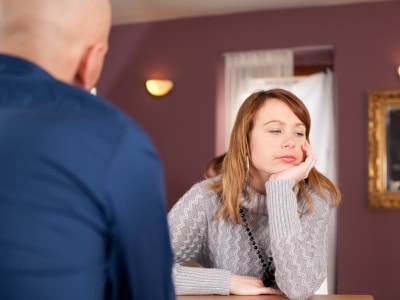 I have read through over 40 pages of archives from your blog, and I can’t find the answer to this one. I’ve been dating a guy (for a month). He really likes me a lot and has been clear about that. And he is great: cute, smart, successful, shares my religion and interests, we both value family a lot, and he is treating me like gold. Doing everything you say a “boyfriend” should. Texting, calling when he says he will. Wanting to see me. Hell, he even texts when he is running late. From what I am reading in your blog, I’m supposed to be happy with this guy. You want me to realize how great he is.

But I feel like I should look forward to seeing him more. I just feel so blah about the whole thing. Like the idea of him is better than the actual person. But he has all these great qualities. I should point out that I’m young (25) and attractive. I just feel like everything in your blog tells me to keep seeing this guy. Where is the line? Because part of me wants to give it time knowing he’s a good one, and part of me says if all I can say in this email is that he’s “great” but I can’t talk about how I actually feel about him…what’s the point? —TJ

Thanks for the important question, and for giving me a platform to clear up some misconceptions about what I teach.

For those of you who are new to this blog, one of my pet topics is the concept that chemistry is all too often an illusion. Of course, it’s still a wonderful feeling, but life experience and science have taught us a few things about chemistry.

Chemistry allows us to sweep under the rug the fact that he’s a selfish asshole or that she’s a crazy bitch.

1) Chemistry is temporary. Usually, chemistry lasts from 1  ½ to 3 years before it wears off. Soon, the person who was the “9” becomes a “6”. At this point, many women become disillusioned with their partners, even though all it means is that you’re finally seeing him clearly.

2) Chemistry is dangerous. When you’re under the influence of chemistry, you are under the influence of hormones that act like drugs. Can’t eat, can’t sleep, high highs, low lows, the feeling of obsessive longing…it’s all quite unhealthy. And what most of us have discovered is that because of the intensity of these feelings, you may completely end up ignoring your partner’s bad qualities.

Chemistry allows us to sweep under the rug the fact that he’s a selfish asshole or that she’s a crazy bitch…and later justify this behavior and fight to stay in broken relationships that make us unhappy.

This is why I have long advocated putting compatibility up on the same pedestal as chemistry, and perhaps elevate it even higher.

A relationship with a 7 chemistry and a 10 compatibility is a happy marriage.

A relationship with a 10 chemistry and a 3 compatibility is going to make you miserable.

Now, where readers have twisted my words — annoyingly, repeatedly — is by suggesting that I’ve somehow told you to give up on chemistry.

Feel free to comb through 800 blog posts and 41,000 comments over six years. I have never said this — or even suggested it. Never.

Yet somehow, many readers seem to struggle with the concept of a nuanced world, instead of a black and white one where a man is either your instant soulmate or a complete turnoff.

Which brings us back to TJ, our original poster:

You’ve got a guy who seems like a great guy and is doing everything right on paper. You think my advice is telling you to keep him when you don’t want to keep him.

If you’re merely tolerating him, rather than enjoying him, you’re wasting both his time and your time. Dump him and move on.

Similarly, if there’s no physical chemistry — meaning, anything less than a 5 or a 6 in that department — cut him loose.

You shouldn’t need to get drunk to kiss him. You shouldn’t force yourself into believing that he’s cute because he’s nice. You need to have some spark to start — and that spark usually grows over time after you come to love the guy.

So those are two reasons — lack of a basic personal and physical chemistry — that you should break up with a perfectly nice person.

Yet there’s one big reason to keep a guy you’re not obsessed with:

If you’re merely tolerating him, rather than enjoying him, you’re wasting both his time and your time.

Your expectations of chemistry are way off.

In other words, you can have an amazing marriage to a man even if you don’t obsess about him, miss him mournfully while he’s gone for a few hours, or be positive he’s your soulmate.

That stuff means nothing. It wears off. It’s distracting.

Relevant story: I was with my wife for nearly 2 years when we got married. If she sadly left me at the altar, I’d be devastated, but I would have recovered. After all, I saw her 3 times a week. We didn’t live together. I’d survived happily for 36 years without her; I would have been able to put things back together in due time.

4 years and 2 kids later, my love for my wife is so much deeper and meaningful. Frankly, I have trouble surviving a few days without her. I’d be 100% lost if she were to leave. THIS is love. That passion most couples feel for the first 18 months? It’s closer to obsession, hope and fantasy. Reality is when the passion fades and you start building a life together.

So what are you to do, TJ? Since you seem pretty ambivalent about him and you’re pretty young, it seems to me you have your answer.

It’s far better to be single than to be in a dissatisfying relationship.

Still, that goes for someone at any age.

My 62-year-old mom married a man who was kind and generous to the core, but she wasn’t attracted to him, didn’t respect him, and didn’t laugh with him. She married him just because he was a good person. The marriage lasted less than two years. As much as I stress comfort, some marriages should never happen at all.

I hope this clarifies — for all of you — what you should and should not experience with a romantic partner: a basic level of personal and physical chemistry, a realistic view on that person’s strengths and weaknesses, and a belief that although you’ve been more wildly attracted to other people before, you’ve never had a better relationship in your entire life. That’s why you lock it in.

That’s what I did.