Home > Blog > Chemistry > Why Do Women Fall For Narcissistic Men? 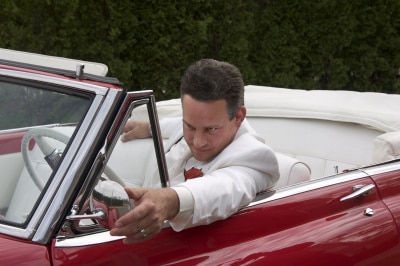 Ever fall hopelessly for a man who was more in love with himself than he was with you? Get in line.

According to a new study published in the Journal of Personality and Social Psychology:

“We tend to be attracted to people who possess the four qualities (flashy and neat dress, charming facial expression, self-assured body movements, and humorous verbal expression) that narcissists tend to (initially) possess…After the first meeting, narcissists were rated as more agreeable, conscientious, open, competence, entertaining, and well adjusted by the other members of the group.”

That’s all well and good, and it explains why charmers make strong first impressions. But further studies show why they’re such bad relationship partners:

Ever fall hopelessly for a man who was more in love with himself than he was with you? Get in line.

“Narcissists don’t play well with others, and this becomes clearer in the long-term. Narcissists don’t tend to do well in long-term relationships, and suffer from all sorts of intra- and interpersonal problems. Paulhus (1998) found that after the seventh roughly 2.5 hour student work group session, narcissists were rated by the other members of the group as less agreeable, less well adjusted, less warm, and more hostile and arrogant.”

So, the article asks, “What are we supposed to do, intentionally go for those who show the traits that are exactly the opposite of what is generally considered attractive?” The author suggests that the answer is an unequivocal YES:

“My message to all those who are sick of being duped by narcissists, assholes, chauvinistics, etc. is to change the script entirely. Girls, next time you go to a club, approach every single guy you see who looks shy and awkward and is standing in the corner of the dance floor sipping his drink too fast. Give the guy a chance who approaches you and isn’t smooth at all but seems like he is genuinely interested in you. Give those a chance who don’t at first display all four super attractive qualities and see if after talking to them for a little while and you’ve given them a chance to open up a bit, if they start to naturally turn on the qualities you are seeking in a potential mate/friend. If they truly aren’t attractive after getting to know them, then you might want to look elsewhere, but give them a chance.”

Personally, I think that’s a little bit extreme. Not every single well-dressed, confident, funny guy is a toxic narcissist (cough, cough), and you shouldn’t avoid all engaging men like the plague. But nor should you be seduced by them. The qualities that matter most in a 40-year-marriage are not necessarily displayed in an online dating profile, in a 15-minute party conversation, or on a brief coffee date. And you’d be well-served to give men who are not so “smooth” a good fair shake before you determine they’re not worthy of you.

One other amusing conclusion from the author:

“I think blogging is a terrific arena for narcissists, if not the best arena imaginable. Narcissistic bloggers can get a constant stream of admiration from complete strangers in the form of comments after each blog post. The blogger doesn’t have to value the commentator or form a relationship with the commentator. In fact, the commentator is helping to feed the narcisstic blogger’s addiction for instant admiration. And comments that are too critical can easily be deleted.”

Read the article here. Your thoughts, as always, are appreciated.