My Boyfriend Wants to Marry Me But Doesn’t Want to Buy an Engagement Ring. 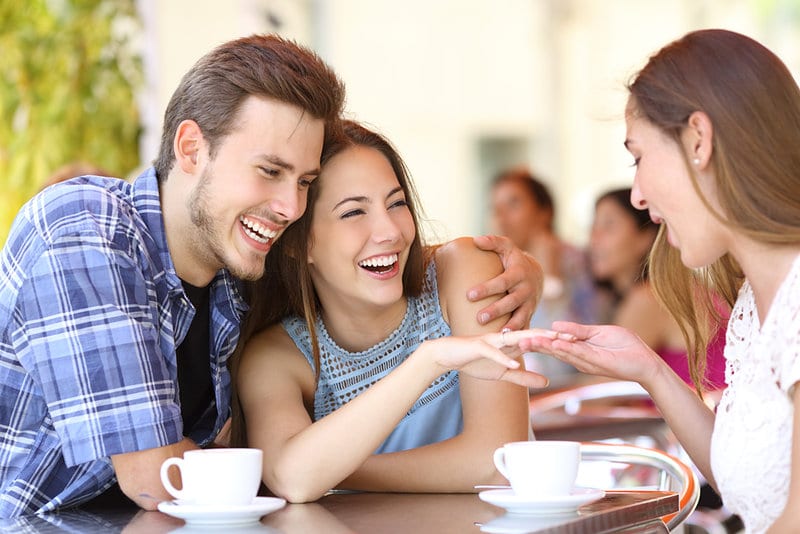 I’ve been with my boyfriend for almost 2 years. We were both married and divorced in our 20’s and are now in our mid-30s. We’ve lived together for the last 6 months and it’s been great. We’ve been talking about our future and wanting to start a family before it’s too late. We’re both reasonably frugal and have no desire to spend a fortune on a second wedding. He mentioned getting ring tattoos (not something I would do) and seemed surprised that I would want an engagement ring since I’m not that into jewelry or flash. I feel like an engagement ring is an important symbol and I’m hurt that he seems like he doesn’t want to get me one. He agreed to go looking, but I felt his reluctance and I’m dreading going now or bringing it up again.

I know his ex-wife was demanding and required a big rock and then she cheated on him less than a year into the marriage…I get that making another investment like that must bring up bad memories, but I also want to feel excited and secure knowing that he wants to marry me. He makes close to 100K, so is my wanting a less than $5k ring unreasonable? Can a guy really want to marry a woman and not want to buy a ring? I’m worried that I may be confusing his not wanting to spend money on a ring with him not thinking I’m worth it. And I’m left wondering: should the man have to buy an engagement ring if his girlfriend wants it, or should he tell her his budget and if she wants something beyond his means she can pay half?

The last blog question was about empathy. Putting yourself in someone else’s shoes. Seeing how it feels. Gaining a sense of perspective outside yourself.

I’ll be the first to tell you that women, in general, are more empathetic than men. They are sensitive to subtlety and nuance. They don’t want to hurt each others’ feelings. They are supportive (often blindly supportive) of friends, loved ones and boyfriends. Except when it comes to money. When it comes to money, there’s this huge honking blind spot that I honestly can’t explain.

I’ve written extensively about money but I’m still left with this odd double-standard:

Women and men are equal. They should have equal opportunity and equal pay. They should do equal amounts of housework and child rearing. Except men should make more money, pay for all the dates, and want to spend a disproportionate amount of his money compared to what she spends.

Chivalry is a nice concept that descends from a time before women made their own money, but still. It’s nice to have a guy take care of you.

Emotionally, that may make sense to you. Chivalry is a nice concept that descends from a time before women made their own money, but still. It’s nice to have a guy take care of you. And hell, I tell men that it’s in their best interests to be chivalrous and to pick up the check during the early phases of dating.

But what we’re talking about is past that. We’re talking about a man spending a percentage of his yearly salary on a shiny trinket — a token that you are equating with how much he loves you. You’re both frugal divorcees in your mid-30’s — he, in particular, has a checkered history with golddiggers — and here you are, actually wondering out loud if his reticence to buy a ring is somehow emblematic of whether you’re “worth it”? Sounds terrible, doesn’t it?

So let’s flip it around and turn this into the gender-blind exercise it should be:

Man tells you after two great years together that you have to buy him a $5000 flatscreen TV.

You balk. It seems a bit superfluous. He already has a TV. It works perfectly fine. Why does he need a new one? “Because of what it symbolizes,” he replies. “To whom,” you ask. After all, you’ve had a perfectly good relationship for all this time and you’re openly planning to get married and start a family. Why in God’s name would this guy need a TV from you? He explains:

You’re taken aback. You slowly explain to him that you DO love him, you DO value him, you ARE excited about him, you’re NOT leaving him — that’s why you want to get married. You just don’t see why he needs a big fancy television. Your boyfriend just shrugs and tells you that it’s just how he feels.

Ultimately, it’s about having this conversation with your boyfriend, and instead of trying to negotiate for a ring, attempting to understand and validate HIS feelings about why he’s not feeling it.

Listen, Kelly, despite the role reversal, believe it or not, I’m sympathetic to your dilemma. It is commonplace for men to buy diamond rings. There is a whole wedding industrial complex around convincing men to spring for jewelry and women to spring for dresses they’ll only wear once.

So while it’s not “wrong” for you to want a diamond to wear that symbolizes your relationship, you have to look internally to figure out why you want it. It’s certainly not because you need proof that your boyfriend loves you; I’d guess it’s because you need external validation. You know he’s not going anywhere, but you want everyone else to know it, too. And just as it’s not wrong” for you to desire a ring in a society that places a premium on such commodities, it’s not “wrong” for a frugal divorcee to want to minimize his costs for this largely symbolic gesture when there are far better things one can invest $5000 in — like an index fund for your retirement or a 529 plan for your future baby.

Ultimately, it’s about having this conversation with your boyfriend, and instead of trying to negotiate for a ring, attempting to understand and validate HIS feelings about why he’s not feeling it. From there, you can come to a mutually agreeable compromise. But it doesn’t start until you’ve owned why you want a ring so bad and accepted he isn’t inherently wrong or selfish for not seeing eye to eye with you.

By the way if he were writing me this letter — he tells me he’s worried that he has another golddigging wife on his hands – I would offer similar advice in reverse. I’d tell him not to judge you for wanting a ring and attempt to understand the meaning behind your insecurity, before arriving at a fair point where you feel he’s invested in your marriage and he doesn’t have to break the bank to “prove” it to you.