How You Can Communicate Better With Your Partner

GET STARTED
I write so much on this blog about chemistry and compatibility, about online dating, about infidelity and sex and flirting, but even if you get past all of that, the one thing that trips up potentially happy couples more than anything is poor communication.

All the attraction, all the money and all the love in the world will not redeem a relationship where one or more of the parties doesn’t know how to communicate in a healthy fashion. And while I wish I came up with this list, credit to the folks at LifeHacker for putting together this spot-on diagnosis of what people do wrong in relationships.

All the attraction, all the money and all the love in the world will not redeem a relationship where one or more of the parties doesn’t know how to communicate in a healthy fashion. 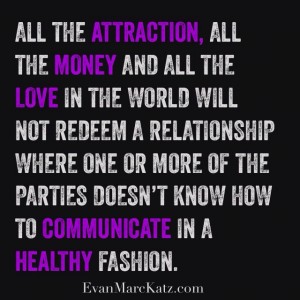 Men are responsible for a lot of problems in love, but some of these areas would seem to be particularly fertile ground for well-meaning women:

Too much talking. If men have one complaint about women, it’s that every detail of a relationship needs to be dissected and analyzed to death. I’ve never heard a man say, “What does she mean when she…” but I get dozens of emails a day from women asking some version of the same question. Men may be clueless and unanalytical in general, but overthinking is poisonous because it leads to overtalking and the death of a normal relationship.

Can’t read each other’s mind. I’m so passionate about this idea that I’m probably going to create an entire product around it. Basically, men are doing the best they can, but they always end up falling short. Why? Because they’ve never been told exactly what to do. They’re just supposed to KNOW, y’know? Alas, that’s not how real life works. We’re generally pretty good at following directions, but really shitty at reading minds. So anytime you have a guy and you even THINK the phrase, “He SHOULD do XYZ” hold that thought and let him know that it would make you REALLY happy if he did XYZ. Voila. Problem solved.

Conflict avoidance.  I didn’t even know that this was a thing until I became a dating coach. When I grew up – for better or worse – I was always encouraged to speak my mind and be self-expressed. I soon learned that most people don’t operate this way; they live in fear, they bite their tongues, they’re afraid of the consequences of actually speaking up. Maybe he’ll get upset. Maybe he’ll dump me. Maybe, maybe, maybe. Think of how good you’ll feel when you have a conversation about getting your needs met, without making him wrong, and he RESPONDS positively. With the right guy and the right tone, speaking your mind shouldn’t cause too much conflict. If it does, find another guy.

Think of how good you’ll feel when you have a conversation about getting your needs met, without making him wrong, and he RESPONDS positively.

Refusing to compromise. I think women are better at this than men. Guys play the “You’re not the boss of me!” card a little too much out of fear of losing their freedom or independence, and they do it to their own detriment. In a perfect world, you’re completely aligned on everything, but in real life, that’s unrealistic. Those who refuse to compromise – especially on things that aren’t important – are bad partners, no matter how deep their convictions.

Lack of empathy. If anything, it’s what I hope to do on this blog – give you a man’s perspective on how he can reasonably see the world in a different light than you do. But if you don’t acknowledge his reality (and he doesn’t acknowledge that your perspective is valid, there’s not much to talk about. Empathy is what makes us sensitive to strangers suffering in other countries, kids who are bullied, minorities who are discriminated against, and yes, our partners, who have their own unique set of beliefs and insecurities. You may disagree with your boyfriend, but you have to do your best to validate where he’s coming from.