How Do I Date After My Divorce If I Think All Women Are Gold Diggers? 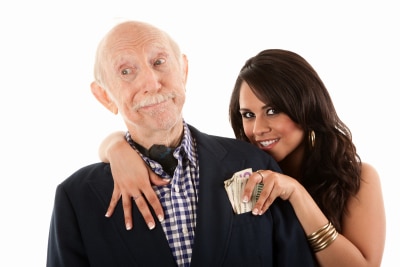 Evan – First, I’d like to thank you and everyone who posts on your blog. Now that I’m back in dating mode, I can use all the help I can get. You recently addressed the issue of how to get over a broken heart. Well when some relationships end, there is not only a broken heart but also a devastating financial impact which naturally has an adverse effect upon one’s emotions. The advice for a broken heart is usually a mixture of “give it some time”, “he/she wasn’t the right one for you”, and “find a new BF/GF.” Over time, the pain dissipates, and if someone is reluctant to start a new relationship because of fear of being hurt again, then the “is it better to have loved and lost than never to have loved” words start flowing. It’s all good advice and most people, myself included, are able to dust ourselves off and enter into a new relationship after an appropriate amount of time. The broken heart I have dealt with. The “broken bank account,” however, is a problem that I have to deal with for the remainder of my life.

My ex was awarded 50% of savings/pension/etc. – no problem. I pay child support – no problem. I have to pay permanent alimony until the day one of us passes away – Big Problem! One of your posters mentioned removing all reminders of an ex as a way to ease the heartbreak. I cannot remove the reminder of sending my ex a substantial check every month. My plan to switch careers after the divorce was derailed because the alimony is based on my earnings potential. My plan to retire is a dream because my state does not recognize voluntary retirement as a valid reason to decrease an alimony award.

I have two issues. The immediate concern is I keep meeting women who basically live a life of leisure due to winning the alimony lottery. Once I realize their source of income, I lose all respect for them and view them as gold diggers and opportunists. Yet part of me realizes I shouldn’t view them this way because they’re only taking advantage of the laws of the state (the McDonald’s hot coffee in the lap scenario just popped into my mind.) I’ve been so turned off by the initial alimony disclosure that I never pursue the relationships further. I think alimony might be warranted based on the circumstances, but how should I dig a little deeper to find out if she is a money grubbing lotto winner or someone who truly deserves the alimony?

I would love to find “the one” and eventually re-marry, yet the practical side of me is extremely risk averse. It’s hard enough to enter into a relationship knowing your heart might be broken some day. After getting ^&* by the courts and the ex, it is extremely difficult to deal with the possibility that I might end up paying alimony to two women for life. Any advice other than find a rich woman or insist on a prenup? By the way, if this is posted on your blog I’d love to hear from some women who are paying alimony as well as the views of some women who are receiving alimony.

This is an important question and I’m not going to muck it up by writing a long-winded answer. All I will say is this before I let our readers have a go:

Unless you want to protect yourself from finding love ever again, you’re better off not interrogating your dates, no matter how much you want to.

Emotionally, you are no different than the woman who had her husband cheat on her. You’ve trusted, you’ve been burned, and it’s hard not to judge each new woman by the unfortunate standards set by your ex. But I’ll tell you the same thing I tell every woman who doesn’t trust: “The next woman has nothing to do with the last woman.” They’re independent rolls of the dice.

And unless you want to protect yourself from finding love ever again, you’re better off not interrogating your dates, no matter how much you want to.

If I’m a woman, it’s not my fault that your wife sucked you dry, and I shouldn’t have to pay the emotional price for it. I shouldn’t be treated like a common criminal. I shouldn’t spend a second thinking about what she did to you. All I can do is show you, in word, and in deed, that my heart is in the right place. Beyond that, you just have to trust.

I think your story is very relevant to this blog, my friend, for two reasons:

1)     To show the man’s side of the story. Even as an advocate for women, I am VERY sympathetic to you and don’t think that divorce is fair to men. Division of assets and life time alimony is a very good reason why a man would not want to be married ever again and it would be hard to reason otherwise with him.

2)     To show women readers who reflexively think that you should give women a break that they’re being hypocritical. It’s easy to sit here and tell you to trust, Jaded Man; it’s a lot harder for them to let a man into their hearts and believe that the right man will do the right thing.

All I can do is stress that you should choose a partner based on character over intense physical chemistry.

It’s even harder to tell both men and women that there are no guarantees in life. If my wife takes off one day because she falls in love with another man, demands half of my money and custody of our daughter, I’d be shocked and devastated — but there would have been nothing I could have done to prevent it.

All I can do is stress that you should choose a partner based on character over intense physical chemistry. If you do that, you’ll be unlikely to find yourself in this awful position once again.

Let’s see what women have to say about it, but I think it would be hard to be unsympathetic to your travails. Really. It’s the worst nightmare of most guys and our women readers would be well-served to be sensitive to this reality…