You Have to Assume the Best In Men, Rather Than the Worst in Men

And to protect yourself from being hurt by a man, you:

Choose not to date at all.
Try to make him earn your trust.
Pull away from a guy at the first hint of trouble.
Tell him your relationship goals on the first few dates.
Want to clarify where things are headed in the first few months.

Those are all perfectly rational. The problem is: the only thing you’re protecting yourself from is the possibility of falling in love.

If you’ve built up a layer of protection to ensure that you never get hurt again, no one can blame you. But you’ll likely find that there aren’t many men who are willing to fight their way thru your layers. You may think you’re scaring off the bad ones, but you’re likely scaring off the good ones, too.

Before I tell you how you can start to change this, I’d like you to take a second and see if this resonates with you. My client, Michelle, is a 48-year-old, never-married woman.

There are 50 million married men in the United States. Apparently, SOMEBODY wants a commitment.

As far as I can tell, there are only 2 reasons she’s never been married.

No one is going to deny Michelle her life experience. It’s as real as the nose on her face. What her experience doesn’t encapsulate is the other side of the coin:

There are 50 million married men in the United States. Apparently, SOMEBODY wants a commitment.

There are legitimate reasons why some men wouldn’t want to commit to Michelle. Without sounding too critical of my lovely client, here are 3 off the top of my head:

She’s fearful. Any man can tell that Michelle has got her guard up when he out with her. She gets nervous and quiet, like she’s on an audition, and isn’t her natural, playful self.

She’s volatile. Michelle’s hell-bent on not getting hurt, so the second a man does something that seems like a red flag (not calling for 24 hours, canceling plans at the last minute due to work), she overreacts.

Because of these characteristics borne out of her negative experiences, Michelle inadvertently comes across as uptight, anxious and needy, as opposed to confident, fun and serene.

And it should go without saying that a lot of men are not going to stick around to find out what lies beneath. I would suspect you wouldn’t be too crazy about an uptight, anxious, needy man yourself.

I’m not saying that you are like Michelle, per se. I’m suggesting that it’s extremely normal to find yourself in her exact same position.

I don’t know you personally. But if you’re anything like most of my readers, you probably work a minimum of 40 hours a week. You probably have friends and hobbies and family. You’re probably really, really, wary of men.

And because of your previous experience, you do everything in your power to prevent the “wrong men” from getting in. You’re vigilant about looking for the signs. And you find them everywhere you go. As a result, you remain single.

You live in a house.

Mr. Right is walking down the street, trying to find his Ms. Right.

There are two houses right next to each other that look identical. They’re gorgeous, modern, spacious, well decorated, inviting. Except for one minor thing.

Which house do you think Mr. Right is going to peek into?

A good man doesn’t need to break down or scale your wall. He’s just going to look for a warm, inviting, open door.

It’s kind of a no-brainer.

Now you can make the argument that the RIGHT man would try to figure out how to scale your 10-foot wall.

You can make the argument that the REASON there’s a wall is that there’s some crime in the neighborhood and you’ve been robbed twice before.

You can justify that protective wall in every way possible. But it doesn’t change the bottom line: 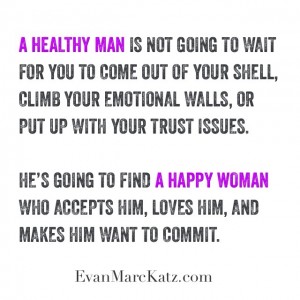 A good man doesn’t need to break down or scale your wall. He’s just going to look for a warm, inviting, open door.

To take it even further:

– A good man will not be able to find you if you’re working 11 hours a day.
– A good man doesn’t need to earn your trust if he’s never done anything wrong.
– A good man may have a number of characteristics that you might not like.
– A good man takes relationships seriously and can’t promise that he will know after a few months that you are destined for the altar.

And although I deeply empathize with you if you’re trying to avoid “wasting” time by trying to figure out the future before HE knows the future, just know that you’re sabotaging any real chance you have to form a real trusting connection.

That’s the dating process, for all of us.

Instead of trying to figure everything out up front to protect from getting hurt, give yourself to the process and let your man reveal his character over time.

Opening the door and assuming the best will make the good men gravitate towards you. Treat him as if he’s going to hurt you and he’s not going to want to stick around.

If your relationship is making you feel anxious, you must learn these 8 reasons why.
697 Shares
Tweet
Share697