Home > Blog > Meeting Men > Why Do Guys Act This Way? > Should I Be Worried That My Boyfriend Stalks Women on The Internet? 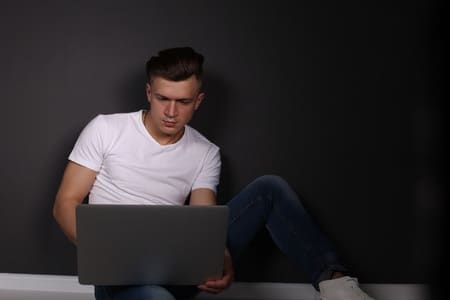 I have a question about internet stalking, more particularly Facebook stalking. My boyfriend of two years habitually stalks other females on Facebook. It could be a crush he had in high school, or a random female from class. What they all have in common is that he talks to none of them, and goes to the extent of figuring out the female’s name to add to his stalk list. My boyfriend and I are both juniors in college, and we attend separate colleges. I attend a more prestigious college, I am attractive enough to get most of the men I desire, I treat him with respect, we have similar interests, we have a great sex life, I make an effort to drive 4 hours to see him at least twice a month, I always make sure he knows how incredibly amazing he is to me, I am a science major that scores in the top 10% of the nation, and he says I am the one.

What I do not understand is why he is still curious of other females? Although I may not be perfect (I mean I am obviously a bit insecure currently), what makes these other females so interesting he must check up on them whenever he is bored between classes or at home? Some of them are beautiful, some are trashy, and some I don’t find attractive. I understand beauty is subjective but would he really want to leave me for any of these females he knows nothing about? What about the hypothetical scenario in which he crosses paths with one of them, and the female fancies him? Should I be concerned that his lust would override his love for me?

I’ve talked to him and he assures me he would never cheat, but I am more concerned about the strength of his heart when surrounded by beautiful women. Can he gain self-control to defeat his urges? Or should I learn to accept that men will do this type of thing even if the man considers his woman to be the most beautiful in his eyes? Ultimately, if I was really “the one,” would I still have the problem? I have honestly never looked at another man with lust. I actually avoid looking at other dudes in general. Perhaps it’s because there is not nearly as many attractive men in this world as there are females…or maybe it’s just my town.

1. You’re too young for this. I know you’re in love. The problem with being in love at age 20 is that you don’t have enough perspective on the world to make healthy long-term decisions. As I often say, think of yourself 5 years ago. What did you know then? Exactly. So consider that you’ll know infinitely more at age 24, and 29, and 34 and 39 than you do right now. If I were you, I would wait to get married at the age of 34.

People who get married before the age of 25 have a 75% divorce rate. That’s not just a coincidence. That’s a sign that you have a lot more living to do before you lock things in.

2. I know, I know: the heart wants what the heart wants. So am I telling you to just give up on men for 19 years? Sleep around without any feelings? Not even bother to cultivate any true intimacy with long-term potential until your thirties? No. I’m just letting you know that people who get married before the age of 25 have a 75% divorce rate. That’s not just a coincidence. That’s a sign that you have a lot more living to do before you lock things in.

a. I’m sure you’re a catch. But it’s not because of your prestigious college, science major or GPA. Those things don’t make you a better girlfriend. They give you the freedom to earn your own living, which is valuable in its own right. Please don’t mistake your academic credentials with assets that add to your boyfriend’s life. You value them far more than he does.

b. Your insecurity is causing you to overfunction in your relationship. Without knowing anything more about you or your ex, if you’re the one who is doing all the driving, there is a power imbalance that needs to be restored right now. What if you never drove to him again? Would that be the last time you saw him? Presuming he has a car, how about you switch off who does the 4 hour drive? Let’s see if he has any skin in the game or if you’re just propping up this relationship with your own efforts.

Finally, your question itself was about Facebook. Let me distinguish between what is normal and what is weird:

Normal: All the benign behaviors of looking up pretty women on the Internet.
Weird: If he actually has something called a “stalk list”.

I’m not going to go into why men look at other women in great detail, since I’ve already done it here and here, but suffice it to say that normal, red-blooded guys do the same exact thing, including yours truly.

I’m obviously not saying this to make myself look good. I’m saying this because it’s important that someone come out and tell the truth — a guy can have all the integrity in the world, be happily married, and still find sexy pictures of other women to be enjoyable. We’ve spent a lot of time on the blog fighting this battle, and God knows, I don’t want to do it any longer, but essentially, you have two choices: accept the fact that he looks at pictures in his own time, but is otherwise an excellent boyfriend, or forbid him from doing it, which will both build up resentment (how well do YOU respond to being told what to do and not being trusted?) and, more likely, force him to lie to you about his behavior.

Looking at pictures isn’t a failing of character; infidelity is.

The unfortunate truth is that you both need to experience a lot more partners to know what “normal” looks like, and make a good, informed, long-term decision. I’m not saying you should dump him for the Facebook thing or the distance thing. I’m saying that you’ll both be absolutely fine if you do.