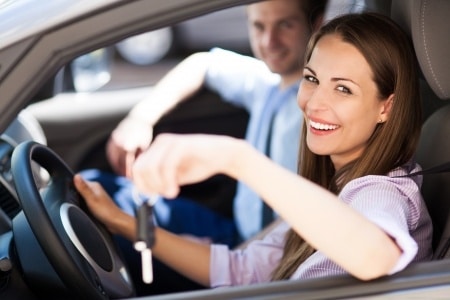 Maybe not. I thought Randi Gunther’s take in the Huffington Post on how modern marriages are flawed was an interesting one. She posits that while there’s been an evolution in gender roles within our relationships, it may not necessarily be for the best.

“Men would develop their feminine side and women their masculine. No longer would it be that the bad boys were sexy and the good women were virtuous. Now quality men needed to add chivalry to their power, and women to claim their ability for independent thinking and leadership. They could imagine a relationship where both were equally blended and free to be the best they could be. “She” and “he” became the new idealized “we.”

Sounds good, doesn’t it? It sure does to me. But evolution has a funny way of surprising us.

Men want women who fundamentally accept them for who they are. Women want men who are their hero, champion, and their overall superior. Few men can live up to this fantasy.

“You would think that the women in these new relationships would be ecstatic. They’ve got a guy who wants to work out together, share parenting, support their parallel dreams, and make their family collective central to both of their lives. They’ve established an equal relationship of coordinated teamwork, and the guys don’t seem to miss their old need to posture for power over intimate connections…Well, guess again…Now they’re dumping men who are faithful, attentive, and respectful, the very men they said they have always wanted. Why would women who have accomplished the female dream suddenly not be satisfied with it? Why are they leaving these ideal guys, and for what reasons?”

It’s pretty much the “Eat, Pray, Love” model. And I think it’s fatally flawed. In general, men want women who fundamentally accept them for who they are. Women want men who are their hero, champion, and their overall superior. Few men can live up to this fantasy. Says Gunther:

“Perhaps these androgynous couples over-valued adopting the same behaviors in their relationship. Maybe the men got too nice and the women a little too challenging. Oddly, the androgynous men seemed to like their new-found emotional availability, while the women began to feel more unfulfilled. Her “perfect” partner, in the process of reclaiming his full emotional expressiveness, somehow ended up paying an unfair price; he was no longer able to command the hierarchical respect from her that was once his inalienable right.

How can a man be a caretaker and a warrior at the same time? How can he serve his woman’s need for a partner who is vulnerable, open, and intimate, while donning armor to fight the dangers that threaten his family and place in the world? How can he stand up and be a man amongst men, loyal to the hunting band that covers his back, while taking the night feeding, while not appearing less than a man? Did he blend his male energy with his female side, or did he learn to be more like a female at the price of his innate masculinity?

The women I have treated who have left their husbands for more “masculine” men believed that their new relationships would be able to both excite and nurture them. Sadly, that has not always happened. The veritable saint with balls is as elusive as ever.”

Yep, I wrote about the “nice guy with balls” seven years ago. He’s a rare breed. 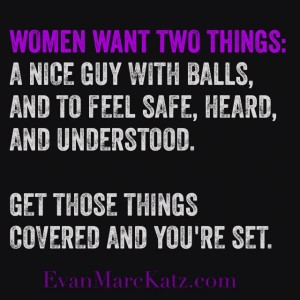 And as I also wrote in “Why You’re Still Single,” in a chapter called “Men Don’t Go Both Ways,” it’s unrealistic to expect the Marlboro Man and the Sensitive Artist to live inside the same human being. There are tradeoffs to both approaches, and ultimately you have to find the guy who is the best fit for you. In my opinion, Type A women are better served by partnering up with Type B men, even if they’re more attracted to Type As.

As a Type A man, the second I realized that I didn’t have to be a slave to my attraction to Type As was the second I fell in love and got married to a Type B. But then again, I consider myself a nice guy with balls.

What combination of masculine/feminine energy have you seen in the most successful relationships you’ve witnessed? Your thoughts below, as always, are appreciated.